(This article first published in Advance for Nurses, which covers the issues that matter most to nurses practicing in all areas of the profession. As that publication winds down, we have archived some articles here.)

By Malinda Loflin, RN, BSN. Malinda is a certified case manager at a hospital in Oklahoma City. During her 22 years as a registered nurse, her clinical experience has been in many specialty areas including the operating room, post-anesthesia care unit, and the emergency department. In 2006, her father tragically died of opioid-induced respiratory depression after a routine surgery. She shared her experience and the impact that it has had on her and her family at the 2011 Anesthesia Patient Safety Conference.

Nursing spot checks on postoperative patients receiving opioids are not enough to ensure the safety of patients. I say this as both a registered nurse who works at a large medical center and as a daughter who has had the misfortune of seeing her own father die between nurses’ spot checks.

Robert Goode was a devoted son, a loving and faithful husband, a nurturing father to me and my brother, and a wonderful grandpa to two boys who thought the world of him. He enjoyed fishing, traveling, and spending time with his family. At 63, he was 9 months away from retiring from Tinker AFB where he had worked as a civilian for over 40 years. 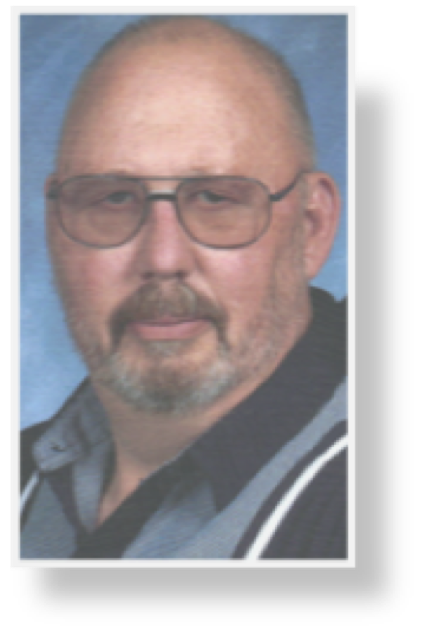 My dad had a hiatal hernia, a condition where part of the stomach sticks upward into the chest, through an opening in the diaphragm. Because he was having difficulty eating, he decided to have surgery to fix it. Although my dad had a history of heart problems, for which he had a pacemaker, he sought and received clearance to have the surgery from his cardiologist.

So on April 5, 2006, my dad underwent surgery through a standard procedure called laparoscopic Nissen fundoplication. Surgery was successful and after surgery the surgeon reported that everything went well and there had been no complications.

After recovery, he was transferred to a general med-surg unit. Within a day after surgery, April 6, he was up walking the halls and feeling great. He was looking forward to going home the next day.

Postoperative orders included a morphine PCA pump and supplemental oxygen. Although, my dad had a history of sleep apnea and used a CPAP at home, he was not electronically monitored. In other words, my dad’s health and life rested on a nurse coming around to his room every 2-4 hours. No matter how dedicated the nursing staff, what would the odds be of one of them checking on him if his condition deteriorated? I am not a statistician, but the odds cannot be very good.

Moreover, my dad’s room was at the end of hall and furthest away from the nurses’ station. So, in between these 2-4 hour checks, he was relying on a nurse at the other end of the hall to notice that he needed attention. The odds, I believe, have surely gone down further.

Yet, this is often the standard of care that patients receive. The Lippincott Manual of Nursing Practice recommends that respiratory rate, sedation score and oxygenation be checked periodically on an hourly, two-hourly, or four-hourly basis. The chart below, developed by the San Diego Patient Safety Council, provides more frequent assessment of the patient, together with a respiratory assessment that also includes end tidal CO2: 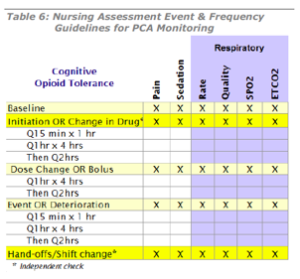 In my father’s case, this periodic assessment (although important for patient care) failed to detect his deterioration. As Dr. Robert Stoelting (president, Anesthesia Patient Safety Foundation) has stated:

“the conclusions and recommendations of the APSF are that ‘intermittent’ spot checks of oxygenation (pulse oximetry) are not adequate for reliably recognizing clinically significant evolving drug-induced respiratory depression in the post-operative period.”

For all patients, we want to prevent the error.

On April 7, at approximately 5:30 in the morning, we received the dreaded early morning phone call that he had taken a turn for the worst and that the doctor was with him. When I got to the hospital, I found my mother sitting outside his room crying. I could hear the sounds of a code being performed coming from inside his room.

We waited outside the room for almost 2 hours before his doctor came out to tell us they were able to get his heart beating again but he was in critical condition. He was then emergently transferred to another hospital that could accommodate his critical level of care.

After what seemed like hours, we were allowed to see him. He was on a ventilator and on multiple IV medications to sustain his cardiac function and blood pressure. He was unresponsive, cold, and bleeding from his mouth and nose.

Unfortunately, his body had begun to shut down. Not only did he have respiratory failure, he had developed renal and liver failures that lead to DIC. An EEG was performed that showed minimal brain stem activity; but, my family and I were still hoping and praying for a miracle.

All through the day the doctors and nurses in the ICU worked diligently to save his life. As the day progressed, his heart became more and more irritable and the medications were unable to keep his cardiac rhythm and blood pressure viable. At 5:00 that evening, as they were preparing to code him again, we made the heartbreaking decision to stop all resuscitative measures. He was pronounced dead at 5:15. Cause of death was an anoxic brain injury.

In the weeks and months to follow our lives were in turmoil. My mother was stricken with grief and could no longer work and had to retire early. I had to leave my coworkers and friends that I had worked with for over 10 years. His mother became ill and no longer had the will to keep living, for she had lost her only child. He didn’t get to see his oldest grandson graduate from high school. Even now after 5 years, there is a huge void in our lives.

In reviewing my dad’s medical records, I learned the nurse who had been taking care of him on the night of the 5th had not checked on him since 11 pm. There were also pertinent morphine administration records “missing” from his chart. Her documentation showed that she precharted on him; in fact you can tell clearly where she changed her time; she wrote “0500 resting quietly, NAD [no acute distress], respiration even; 600 resting quietly, NAD”. Then, “report given to the next shift”; but, in reality at that time, they were transferring him to another facility because he had coded.

Although I could criticize that nurse and all of the attending nurses for not being attentive enough, patients deserve better. It is not as though we don’t have the technology to monitor for blood oxygenation, because we do with a pulse oximeter. Moreover, we do indeed have the ability to monitor for the adequacy of ventilation with capnography.

Now, I understand that technology will advance — monitoring devices will improve, as they should. However, let’s use what we have. Let’s create an electronic safety net around our patients. Let’s give those nurses down at the end of the hall a fighting chance to know when the patient furthest away from them is going into opioid-induced respiratory depression. Let’s give nurses the comfort of knowing their patients are being continuously electronically monitored, so they can attend to other patients also needing their help. As a nurse, I have witnessed how continuous electronic monitoring can save patients’ lives.

“Human vigilance is required but insufficient, continuous electronic monitoring needs to be there to support and back up nurses, and allow them to visit a patient while monitors are continuously assessing other patients for various physiological parameters (such as, oxygenation with pulse oximeter and adequacy of ventilation with capnography).”