Here are some definitions that may help to understand better the science and medicine discussed in this site or articles you might read — I know it’s helped me! (please provide your favorite health and safety definitions in a reply below):

Carbon Dioxide: “formed especially in animal respiration” – the movement of respiratory gases (as oxygen and carbon dioxide) into and out of the lungs

Capnograph: “a monitoring device that measures the concentration of carbon dioxide” that a person breathes out in exhaled air and displays on a numerical readout and waveform tracing; for a discussion of the differences between capnographs, capnometers and capnograms, please click here; a capnograph is shown below:

Capnography: “the measurement of carbon dioxide (CO2) in exhaled breath”

End Tidal: “the last portion of expired” air that passes out of the lungs in an ordinary breath

Patient Controlled Analgesia (PCA) pumps: “give patients the power to control when pain medication (as prescribed by their doctor) is delivered to them by computerized pumps connected directly to the patients’ intravenous line (IV).”

Pulse Oximeter: a device for measuring the amount of oxygen in blood; an example is shown below: 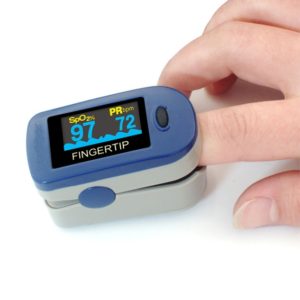 Respiratory Depression: “respiration that has a rate below 12 breaths per minute or that fails to provide full ventilation and perfusion of the lungs”

Waveform: when used with a capnograph “a graphic representation” of carbon dioxide exhaled by a patient; a normal capnography waveform is shown below:

One thought on “Health & Safety Definitions”