Venous thromboembolism (VTE), commonly referred to as blood clots in the legs or lungs) is a common and potentially avoidable cause of death and illness in hospitalized patients. Each year in the United States, it has been estimated that about 300,000 cases of VTE occur. Mortality can be as high as 3.8% in patients with deep vein thrombosis (DVT) and 38.9% in those with pulmonary embolism (PE). VTE is associated with a high risk of death in the United States and Europe, with an estimated incidence rate of 1 in 1,000 patients. VTE is particularly common after a stroke. Approximately 20% of hospitalized immobile stroke patient will develop DVT, and 10% a PE. 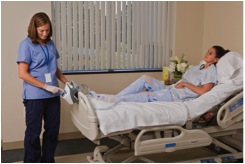 There is a need for clinical practice to change and to reduce mortality and morbidity. As researchers wrote in “Venous Thromboembolism After Acute Stroke”:

Treatment for established venous thromboembolism (VTE) is highly effective in preventing morbidity and mortality, yet pulmonary embolism (PE) accounts for up to 25% of early deaths after stroke. There is little evidence to support the notion that DVT prophylaxis reduces mortality. Identifying VTE risk factors in a patient that has had a stroke should identify the appropriate treatment depending on the high risk nature inherent in the stroke patients. This is because the current diagnostic paradigm is reactive rather than proactive: the clinician responds to VTE when it becomes symptomatic, in the expectation that initiation of treatment will prevent progression to more serious manifestations. This approach is flawed, because sudden death from PE is frequently unheralded and nonfatal symptomatic pulmonary emboli are often unrecognized or misdiagnosed.

Consequently, the Clots 3 study led by Martin Dennis, MD (University of Edinburgh, Western General Hospital) is a landmark study that will change the clinical practice to prevent DVT in stroke patients.

The Clots 3 study was a large multi-center randomized controlled trial using thigh length Intermittent Pneumatic Compression (IPC). It showed that use of IPC was associated with a one third reduction in the risk of proximal DVT and additionally a 14% in survival within six-months. The study’s purpose was to evaluate the effectiveness of IPC in decreasing the risk of proximal DVT in patients who have had a stroke.

We interviewed Dr. Dennis about this landmark study and its implications for clinical practice.

To read the interview on Neurology, please click here.