Patient Safety Monitor Journal reported in its May 2015 issue about the recent respiratory compromise roundtable discussion. At this meeting hosted by the National Association for Medical Direction of Respiratory Care (NAMDRC), healthcare leaders discussed guidelines for identifying and preventing respiratory compromise.

Organizations that participated in the roundtable discussion were:

Although respiratory compromise can lead to intensive care and mortality, it’s still a common occurrence among surgical patients. A 2013 Healthgrades, Inc. report evaluated Medicare hospitalizations from 2009 to 2011 and found that respiratory failure following surgery occurred at a rate of 13.79 per 1,000 cases. Respiratory compromise (consisting of insufficiency, distress, arrest, and failure) leads to higher mortality rates and higher rates of ICU admissions, which increases costs and leads to additional complications for patients.

#respiratorycompromise can lead to intensive care and mortality, and is common occurrence among surgical patients #ptsafety Click To Tweet 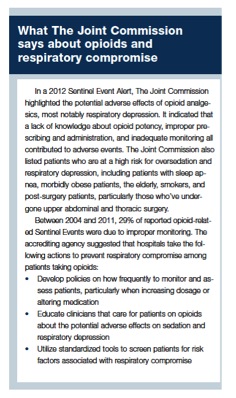 You might have a patient sitting in a bed and everything is hunky dory, and a few minutes later there is a change in status. Then a few minutes or hours later, there are further signs that things are deteriorating. At some point that is recognized and some level of intervention is initiated. I think some feel that if we could pick up earlier, we could prevent that acceleration to the point of massive intervention.

The possible rapid deterioration of seemingly healthy patients was also emphasized by Michael Wong, JD (Executive Director, Physician-Patient Alliance for Health & Safety), who said that PPAHS established the Respiratory Compromise Institute to develop tools and resources geared toward eliminating preventable adverse events associated with respiratory depression. He described the need for pointing the need to identify the earliest possible onset of respiratory compromise:

If you can picture a graph with death on the right side and on the left is when the patient is admitted, somewhere from admittance to end point there is a time sequence in which clinicians could have intervened. The real problem is when do you identify that possible moment?”

Opioid-naive and sleep apnea patients are often identified for being at risk for complications. However, Ms. Hanneman recommended that clinicians focus their attention on any patient receiving opioids.

We’re trying to come up with a clear definition of what respiratory compromise is, something that has really not been done in the past, so everyone is on the same page as to how it’s defined.