Now a new study, using data from 12 European countries from the large RN4CAST study, provides insight into the impact of 12-hour shifts on nurse well-being (Dall’Ora 2015). 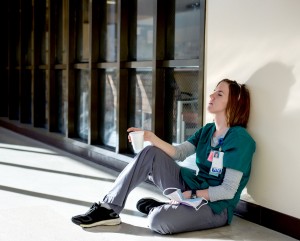 Those researchers found that, while all shift lengths greater than 8 hours were associated with more nurse adverse outcomes, nurses working shifts ≥12 h were more likely to experience burnout, have emotional exhaustion, depersonalization, and low personal accomplishment.

Like most previous studies, the current Dall ‘Ora study was unable to differentiate whether longer shifts were due to mandatory or voluntary overtimes as opposed to formal 12-hour shifts. Their study confirmed previous studies that there is a relationship between any overtime and adverse effects on nurses. However, they were able to demonstrate that both shift length and overtime had independent effects on the variables studied.

The Preference/Burnout Paradox of the 12-Hour Shift

Their findings are most relevant in that they suggest current strategies of using 12-hour shifts to help retain nursing staff may, in fact, be counterproductive in the long run and lead to more nurse absenteeism and job turnover.

But there are questions left unanswered by this and all previous studies. The Dall ‘Ora study, like the Griffiths study before it, did not distinguish between nurses who chose to work 12-hour shifts vs. those for whom it was mandated. Given the correlation between overtime and nurses’ perceptions of suboptimal quality and patient safety, one might anticipate that the degree of discomfort nurses have with their shift length may be an important contributory factor.

A recent UK review of 12-hour shifts (Ball 2015) first looked at the published literature on 12-hour shifts and found many studies were plagued by small sample sizes, limited outcome measures, poor response rates, self-reporting bias, etc. Importantly, they found no randomized controlled trials. They conclude that, in general, most of the studies appear to show some degree of negativity, either for nurses, patients, or both towards 12-hour shifts and that many of the adverse outcomes studies relate to fatigue which can also jeopardize patient safety.

They then included data from the RNCAST consortium.

And, when taking the other predictor variables into account, the odds of being dissatisfied with their jobs were 1.51 times higher for nurses working on shifts of 12 hours or longer compared to those work eight hours or less. Somewhat paradoxically, there was no clear pattern of variation in work schedule dissatisfaction with length of shift.

Most interesting in an article about a conference that noted some negative union views about 12-hour shifts in the UK (Merrifield 2015) were the comments posted on the website that really reflect the polarized views of nurses toward these shifts. Many love them, many hate them!

If the 12-hour shift is actually worsening job satisfaction and leading to increased nursing turnover as the Dall‘Ora study would suggest, we may be exacerbating the shortage of nurses many countries already face. Because the 12-hour shift has become so popular in the US and other countries, both with nurses and hospitals, it will likely take compelling evidence to cause reversion to shorter shifts. The majority of nurses we know like the 12-hour shift because of its flexibility and that it allows them to spend more time with their families and other activities outside the hospital.

Is it Possible to Conduct RCTs on Shift Length?

But it is this very personal preference that would make it very difficult for the ultimate study on this issue – a randomized controlled trial (RCT) – to be performed. The many problems encountered in trying to do such a study were recently noted in a pilot study intended to do such a comparison of 8-hour vs. 12-hour shifts (Martin 2015).

Probably the only way to do such a quasi-RCT would be to take a sizeable hospital with multiple wards handling comparable patients and then make half the units 8-hour shift units and the others 12-hour shift units, letting nurses choose which unit they want to work on. Objective quality and patient safety outcomes would have to be measured in addition to nurses’ impressions of care and measures of nurse well-being.

Such a study would probably still be subject to selection bias. Given the hospital nursing shortages in the US it would be very difficult to adjust results for the occurrence of overtime.

This is a critically important issue in quality and patient safety as well as for considerations about nurses’ well-being and the future of the nursing workforce. But conclusive answers are not yet available. In the interim see some of our prior columns regarding strategies to mitigate nurse fatigue and also our columns on the impact of fatigue in healthcare and other industries and use of strategies such as power naps.

And speaking about 12-hour shifts, if you haven’t yet done so read the book “The Shift” by Theresa Brown (Brown 2015). It’s a real-life story about a nurse’s 12-hour shift on an oncology unit. We’ll probably formally review it at some point but it’s great reading and lets you visualize so many of the issues we talk about in our columns.