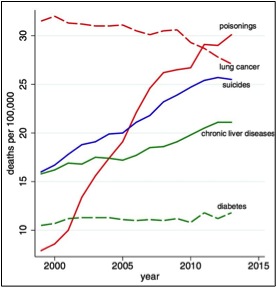 The analysis by Dr. Deaton and Dr. Case may offer the most rigorous evidence to date of both the causes and implications of a development that has been puzzling demographers in recent years: the declining health and fortunes of poorly educated American whites. In middle age, they are dying at such a high rate that they are increasing the death rate for the entire group of middle-aged white Americans, Dr. Deaton and Dr. Case found.

Thanks @RogerAjogbe, @MarcVegan, and many others for their tweets about the research by Dr. Deaton and Dr. Case.

In an interview with Dr. Deaton, he noted “data showing an uptick in reliance on opioid painkillers — an epidemic that started in the late 1990s that has been linked with terrible health and mortality outcomes.”

So, what can be done to improve this situation?

Hospitalized patients receiving postoperative opioids—such as morphine, hydromorphone, or fentanyl—are at risk for drug-induced respiratory depression, which can lead to anoxic brain injury or death.

Even if they are otherwise healthy, such patients can be at risk if, for example:

To address this problem, a healthcare facility’s medical leadership should implement the relevant recommendations from the Anesthesia Patient Safety Foundation (APSF) and the Joint Commission.

Hats off to those for their tweets about the ECRI report, including @nursesau, @ssfraser, and @CPCBernoulli.

Research presented in poster form during PAINWeek 2015 of a survey of 85 pain management specialists found that a “majority of members of the medical community admit that they haven’t received enough training on long-term opioids to properly manage chronic pain patients”: