In a poster presentation at this year’s annual of meeting of the American Society of Anesthesiologists, researchers looked at anesthesia-related physician malpractice claims between 2005 and 2013. 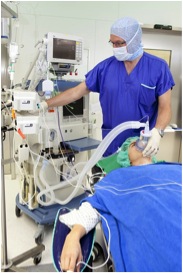 In commenting on this finding, lead researcher Richard J. Kelly, MD, JD, MPH, FCLM, an anesthesiologist from the University of California, Irvine School of Medicine, said:

Since 2005, overall spending on anesthesia-related claims has decreased by 41.4% ($83.3 million), which is great. It looks like we’re doing something right.

Due to increased outpatient utilization, the proportion of claims for outpatients has actually increased as compared to inpatients …

Could the increase in outpatient claims be due to differences in medical standards from those in inpatient settings?

What is instructive in terms of gained knowledge in the Joan Rivers’ death is the differing patient safety measures in place by the application of standards when a sedative is delivered to the patient.

The ASA standards provide an extra level of patient safety by requiring that the adequacy of ventilation be monitored in addition to oxygenation. The ASA standards therefore call for the “continual observation of qualitative clinical signs and monitoring for the presence of exhaled carbon dioxide”.

Of the claims paid, death or major injury was the usual patient outcome – occurring 69.6 percent of the time in inpatient claims and 63.7 percent in outpatient claims.

This finding underscores the dangers related to the use of opioids. As The Joint Commission stated in Sentinel Event Alert #49 “Safe use of opioids in hospitals”:

While opioid use is generally safe for most patients, opioid analgesics may be associated with adverse effects, the most serious effect being respiratory depression, which is generally preceded by sedation.