While the medical examiner ruled there was no anatomical cause for Bougie’s death, his family believes the mix of pain meds he was on caused him to fall into such a deep sleep, he stopped breathing. They are suing the hospital. Their attorney says even though nurses checked on Bougie once an hour, they should have used a fingertip sensor that would have alerted them when the level of oxygen in his blood went too low.

The finger tip sensor referred to by Bougie’s lawyer is a pulse oximeter, which measures the oxygenation of blood.

However, according to healthcare experts, monitoring with a pulse oximeter may not have been the panacea that Bougie’s lawyer may be looking for.

In an interview with Matthew Grissinger (Director, Error Reporting Programs, Institute For Safe Medication Practices), importance of pulse oximeters may be misplaced and monitoring with capnography for adequacy of ventilation is a better indicator of respiratory depression:

… there’s too much reliance on pulse oximetry readings, which can offer a false sense of security since oxygen saturation is usually maintained even at low respiratory rates, especially if supplemental oxygen is in place. As ISMP President, Michael Cohen has said, “Capnography measures the end tidal volume of carbon dioxide, which is a more reliable indicator of respiratory depression and has previously been employed in limited areas such as critical care units.

To view the APSF video on the need for paradigm shift, please click on the image below (or go to http://apsf.org/resources/oivi/): 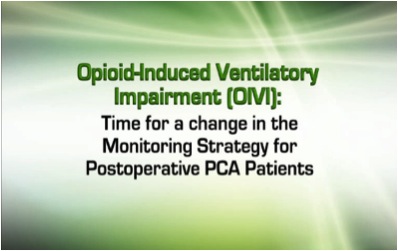