36-year old Casi Rott had just arrived home, after being discharged from hospital after giving birth to triplets.

But just after she walked through the door, she started having severe chest pains, brought on by a blood clot. She died as her husband frantically drove her back to the hospital. 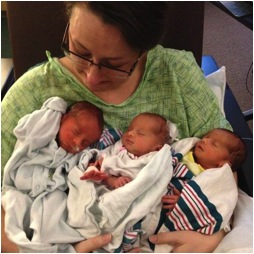 Ms. Rott had developed a blood clot in her lungs after delivery of her triplets by C-section. ABC News reports:

Casi Rott, a secretary at a local elementary school, gave birth to her three youngest children on Jan. 29, her husband said. Initially, she didn’t show any signs of complications, but a few days after returning to her brother-in-law’s home, she started to feel severe chest pains and was rushed back to the hospital.

The doctors diagnosed her with a pulmonary embolism — blood clot that had traveled to her lungs, Rott said, noting that doctors “did tons of tests and scans and put her on all the medications that she needed to be on.”

Casi Rott had been on bed rest for two weeks before she delivered through cesarean section, both of which can increase the risk of developing a blood clot, according to the Mayo Clinic.

MaryAnne Laffin, NP, CNM, FACNM (Immediate Past President, National Perinatal Association) says that pregnant mothers need to understand the added risk of VTE that pregnancy and delivery by cesarean section brings. In addition, they need to be aware of this risk not only antepartum or prior to delivery, but that this risk continues upon discharge and up to one month post partum.

“The risks of VTE are 4-5 times higher for pregnant women than for non-pregnant women,” says Ms. Laffin. “Women not only need to know of the added risk of blood clots during pregnancy, but that this risk increases following cesarean birth. Following c-section, the risk of VTE is almost two times higher.”

To help prevent VTE in maternal patients, the Physician-Patient Alliance for Health & Safety (PPAHS) brought together a panel of experts to develop the OB VTE Safety Recommendations. These recommendations provide four concise steps that: