Being able to easily assess a patient’s condition via a single, multi-parameter indicator would help clinicians determine whether changes in treatment are needed. The desire for such an indicator was confirmed in two surveys conducted by the Physician-Patient Alliance for Health & Safety (PPAHS) conducted in 2013 and again in 2015.

In PPAHS 2013 First National Survey of Patient-Controlled Analgesia Practices, 7 out of 10 hospitals indicated they would like “a single indicator that accurately incorporates key vital signs, such as pulse rate, SpO2, respiratory rate, and etCO2.” Respondents to this survey consisted of a mix of clinicians—18% physicians, 35% non-physicians (such as RTs and RNs), and 47% pharmacists.

A similar desire for a multi-parameter indicator was also found in a 2015 survey of nurses from the American Hospital Association. In this nursing survey, it was found that 67% of respondents said that they would like a single monitor multi-parameter device that measures all current physiological monitoring parameters.

Because of these survey results, I was very interested in the research that was presented at the latest annual conference of the American Society of Anesthesiologists. This research was conducted by Hiroshi Morimatsu, MD, Ph.D (Okayama University Hospital, Okayama, Japan) and his colleagues, who used a patient pulmonary index that gathered into a single indicator a measurement of a patient’s end-tidal CO2, pulse oximetry, respiratory rate, and pulse rate on a ten-point scale, as illustrated below: 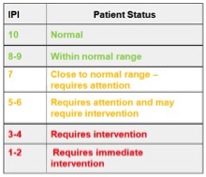 I wanted to better understand the usefulness of this patient pulmonary index (which Dr. Morimatsu refers to as “IPI”), so I conducted this interview with him about his research:

Wong: Why do you think that it is valuable for clinicians to be able to identify the signs of respiratory compromise as early as possible in their patients?

Wong: Pulse oximetry has been described as a lagging indicator of respiratory compromise. Do you agree and why?

Morimatsu: The most important shortcoming for pulse oximetry is that its maximum number is 100%. If arterial PaO2 is higher than 100 mmHg, every measurement should give you 100%. Especially when you are giving supplemental oxygen to the patients, their SpO2 would always be high. So, it is difficult to see early deterioration with low SpO2.

Wong: Do you believe that monitoring with capnography (end-tidal CO2 monitoring) would be a better indicator for respiratory compromise?

Wong: At the recent ASA conference in October 2015, you and your colleagues presented research on a patient pulmonary index (IPI). What were your major findings from your research?

Morimatsu: We conducted a two-center, prospective observational study. We studied 163 high-risk patients in our PACUs, and we found the incidence of respiratory compromise was 7%. We analyzed accuracy to predict respiratory compromise with both SpO2 and IPI on the admission to the PACU. We found the area under the ROC curve was 0.88 for IPI and 0.59 for SpO2, which means IPI is better than just monitoring for SpO2 in this setting.

Wong: IPI consists of a ten-point scale. At what point on the scale would you recommend clinicians pay more attention to their patients? Do you think that intervening at this point is earlier than what is usually being done currently?

Morimatsu: Our study showed that initial IPI<7 had a sensitivity 55.6%, specificity 88.8% for respiratory compromise in the PACUs. I think IPI<7 would be a nice scale clinicians should pay more attention. It is difficult to say which is earlier because we did not have any data. However, our study showed IPI is more accurate to predict respiratory compromise than conventional SpO2 monitoring.

Wong: Nurses and other hospital staff lead busy work lives. How might the use of a patient pulmonary index such as IPI help them manage their work more efficiently and optimize the care they give to their patients?

Morimatsu: As you mentioned, hospital staff are quite busy, so I think IPI helps a lot. IPI incorporates four patient parameters (end-tidal CO2, respiratory rate measured by capnography, pulse rate, and blood oxygenation SpO2 as measured by pulse oximetry) into a single index value. In particular, when counting respiratory rate (RR) is cumbersome and, sometimes, could be ignored. IPI can help predict clinically important changes, and, therefore, will add value to patient care.

Wong: What do you think are the major advantages for the attending clinician in using a patient pulmonary index such as IPI?

Morimatsu: I think there are three advantages. First, IPI increases reliability. Monitoring both oxygenation and ventilation increase the reliability of detecting patient deterioration. Second, IPI increases predictability. Our study showed IPI could detect respiratory compromise even on the admission to the PACUs. This would give the clinician the chance to intervene to prevent further deterioration. The decreased value of SpO2 is a final sign of deteriorated respiration. The final advantage is increased feasibility. IPI is easy to use. You just put the end-tidal CO2 nasal cannula and SpO2 sensor on the patient. You do not have to take arterial blood sample. That will increase feasibility in several situations.