For this week’s weekly must-reads, we’re focusing on the topic of sepsis for National Sepsis Awareness Month. According to the Mayo Clinic:

Sepsis occurs when chemicals released into the bloodstream to fight the infection trigger inflammatory responses throughout the body. This inflammation can trigger a cascade of changes that can damage multiple organ systems, causing them to fail.

A recent Vital Signs Report issued by the CDC finds that sepsis begins outside of the hospital in nearly 80% of patients. 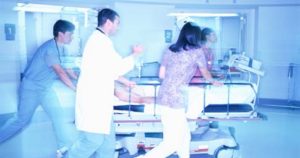 Additionally, 7 in 10 patients with had recently used health care services or had chronic diseases requiring frequent medical care. The report continues with 5 key steps clinicians can take to prevent sepsis from occurring.

Sepsis is an issue with far-reaching implications beyond statistics at an organizational level. The 21st Show recently interviewed Tony Galbo, the father of 5-year-old Gabby. Her untimely death in 2012 was a key driver in the eponymously-named “Gabby’s Law”, an Illinois bill recently passed that requires hospitals to adopt protocols for the early recognition and treatment of patients who have sepsis. It also requires that the protocols have certain components including those specific to treating children and adults.

This follows actions by the Ohio Hospital Association (OHA) to combat what some perceive as a growing sepsis epidemic. HealthLeadersMedia.com reported that incidences of severe sepsis and septic shock increased by close to 46% in the state between 2012 and 2015. The OHA has responded to this by implementing a 2-year program within hospitals with a focus on early recognition and prevention. Watch the 2016 Quality Summit discussion on YouTube below:

In addition to awareness and protocols, the use of technology to alert and respond to sepsis and sepsis-related complications is being developed.

EMS1.com reports that the use of capnography to monitor for ETCO2, along with lactate monitors to measure blood lactate levels, are key technologies for EMS providers in early detection.

In the future of technology, researchers at Harvard Medical School are working on an experimental tool to clean infected blood. StatNews.com reports that the device being developed by a team led by Dr. Daniel Kohane is designed to both monitor and filter for cytokines, a molecule, which in elevated levels can harm the body during second-stage septic infection.