Editor’s Note: This research was presented as a poster at the 2017 ANCC National Magnet Conference.

For over a hundred years nurses have monitored the same vital signs. Unfortunately these vital signs can be slow to change, inaccurate, and misleading. Although there have been modern advances in physiological monitoring devices, their acceptance has been limited. Pulse oximetry developed in the early 1970’s is extremely useful in measuring oxygenation, although it has limitations related to the following factors: poor signal strength, fingernail polish, anemia, patient motion, calloused skin, hypoperfusion, time lag, and vasoconstriction. 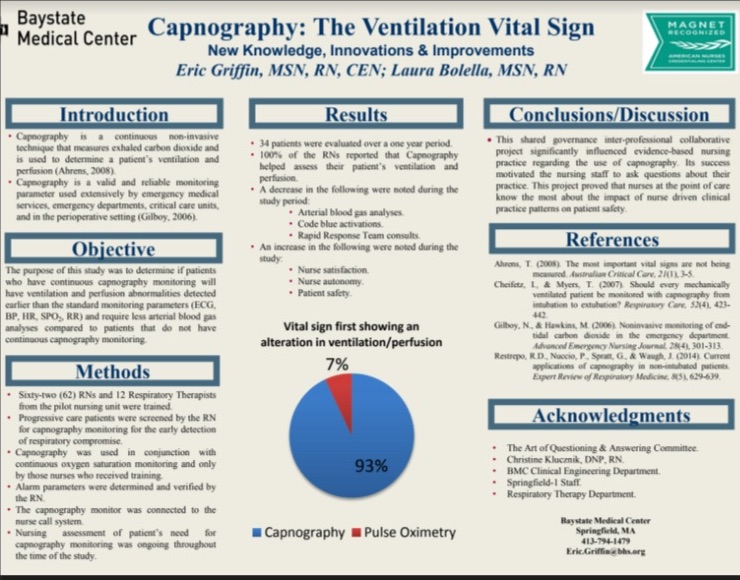 Capnography, a monitoring device that measures the concentration of carbon dioxide in exhaled air and displays a numerical readout and waveform tracing is used to determine a patient’s ventilation and perfusion status. Currently it is widely used by emergency medical services personnel and in the peri-operative, critical care and emergency department setting. There is abundant evidence of the benefits of capnography monitoring in the literature, yet it is not seen as a standard vital sign. There are limitations to capnography monitoring as well, such as: patient position, patient intolerance due to discomfort and its ability to only be used with certain oxygen delivery devices. Because of the limitations of these monitoring devices the concurrent use of both is mentioned often in the literature as a best practice.

To validate this best practice a performance improvement project was conducted on an intermediate care unit at a large urban academic teaching hospital. The overall goal was to educate nurses on how to use capnography in order to improve patient safety and clinical outcomes by preventing severe hypoxic episodes through the early recognition of hypoventilation, apnea, and airway obstruction. It was used as an objective measurement of fundamental life functions: airway patency, breathing adequacy and circulatory efficiency.

The project was submitted to the hospital’s Art of Questioning Campaign, placing first. The campaign’s goal was to increase staff nurse participation in evidence-based practice and enhance nurse’s clinical inquisitiveness. A collaborative inter-professional approach was used in training nurses, physicians and respiratory therapists on capnography monitoring. Patients were screened for capnography monitoring based on the following criteria: respiratory compromise, obstructive lung disease, obstructive sleep apnea, opiate/benzodiazepine use, inadequate ventilation, poor gas exchange, and poor perfusion. Capnography was used in conjunction with continuous oxygen saturation monitoring and only by those nurses who attended in-service training. Nursing assessment for the need of capnography monitoring was ongoing throughout the length of the project.

Thirty four patients were evaluated over a one year period. Ninety three percent of the nurses involved in the project reported that capnography was the first indicator of an alteration in their patient’s respiratory status. The project demonstrated a decrease in: rapid response team calls, code blue calls and arterial blood gas analyses. Staff satisfaction and autonomy as well as patient safety were also increased. Capnography has become a standard of care on the pilot unit. A secondary gain is that other hospital units are adopting capnography monitoring as their standard as well.

This shared governance initiated project significantly influenced evidence-based nursing practice regarding the use of capnography. Its success motivated nurses to ask questions about their practice and proved that nurses at the point of care can positively impact patient safety and outcomes. 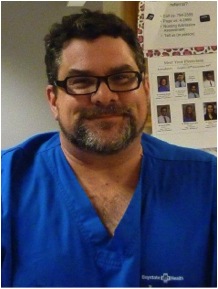 Eric is the Magnet Program Director at Baystate Medical Center in Springfield, Massachusetts. He has been a Registered Nurse for 17 years. He is a published author and researcher. He has presented at the local, state and national level on interprofessional relationships, capnography, emergency preparedness and disaster response. His clinical areas of expertise are emergency nursing, pediatrics and medical-surgical nursing. His professional areas of interest are patient safety, end of life care, education, injury prevention and professional development. 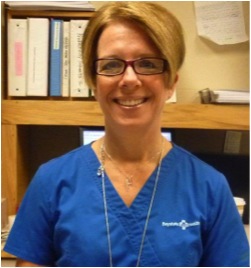 Laura is the Assistant Nurse Manager of a medical intermediate care unit at Baystate Medical Center in Springfield, Massachusetts. She has been a Registered Nurse for 30 years. She has presented at the national level on interprofessional relationships, and capnography. Her clinical areas of expertise are medical-surgical nursing, school nursing and ambulatory care. Her professional areas of interest are public safety, education, and advancing the profession of nursing.