Editor’s note: In this editorial from the desk of PPAHS’s Executive Director, the proposed Hawaii bill to raise the legal age to buy cigarettes to 100 years raises the question – “To Educate or Legislate Better Healthcare?”

Hawaii State Representative Richard Creagan recently proposed a state bill that would have raised the legal age to buy cigarettes in the State of Hawaii to 100 years:

Although the bill was “shelved” for the 2019 legislative period in a unanimous vote, the efforts by Dr. Creagan raise the question – “To Educate or Legislate Better Healthcare?”

Bill proposed by State Representative Richard Creagan would increase the smoking age in Hawaii to 100 - what do you think? #smokingcessation #publichealth Click To Tweet

It is indisputable that smoking is bad for the health of the smoker and those who come in contact with the cigarette smoke. The CDC warns “Tobacco use is the leading preventable cause of death in the United States” and points to the following statistics:

More than 480,000 deaths annually (including deaths from secondhand smoke)

278,544 deaths annually among men (including deaths from secondhand smoke)

201,773 deaths annually among women (including deaths from secondhand smoke) 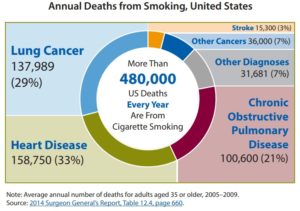 In putting forth the bill, State Representative Richard Creagan rightly stated that the cigarette is “the deadliest artifact in human history.”

By raising the legal buying age of cigarettes to 100 years of age, the state of Hawaii would have saved a lot of lives and costs. According to Representative John M. Mizuno, Chair of the House Health Committee said, “According to the Department of Health, in Hawaiʻi, 1,400 individuals die of smoking-related causes each year. The annual health costs directly related to by smoking in Hawaiʻi is approximately $526 million.”

In thinking about the bill and what it was trying to achieve, it should have easily passed. And, yet, the bill did not pass.

This raises the interesting question – is it better to educate or legislate better healthcare?

Those in favor of education would argue that it should be up to the individual to decide whether to smoke or not. However, in counter to that, is the fact that the dangers of tobacco smoke was known by the tobacco industry insiders by the mid 1950s, which was laid out in the Surgeon General’s of 1964. Writes Dr Robert N Proctor (History Department, Stanford University):

The 1964 Surgeon General’s report, which recognised smoking as a cause of lung cancer in men, is often regarded as a turning point in the recognition of health harms from smoking. But the Surgeon General’s report was actually a kind of scientific anticlimax: from an evidentiary point of view the case against smoking had been closed by the end of the 1950s, and it was only the truculence and obstinacy of cigarette manufacturers that forced a blue-ribbon review by the federal government. Charles S Cameron, Medical and Scientific Director of the American Cancer Society, put the matter nicely in a 1956 overview for the Atlantic Monthly, noting that if the same level of evidence had been arrayed against, say, spinach, no one would have objected to the banning of that plant from the national diet.

Consequently, most would conclude that education has already been tried – and tried hard since the 1960’s.

So, education has been tried – should we turn to legislation?

Should State Representative Richard Creagan’s approach to reducing deaths and costs be tried? What about for other healthcare issues? Tell us what you think?