Editor’s Note: This editorial from the desk of PPAHS’s Executive Director encourages sepsis protocols to be revising to prevent complications of care.

Therefore, to go into hospital and contract another ailment – one unrelated to what we went in for – is concerning. For the patient, it means having to deal with this second ailment, including the related extra time, expense, and pain and suffering that that entails. For the physician, it means that something has been done or not done that has resulted in the patient getting ailment number two.

In a recently released analysis of the Premier Healthcare Database, the Premier Safety Institute looked at data (including discharge data) from 1,759,347 cases from 871 hospitals between October 2015 and September 2018.

The Premier analysis contained good news – a 15% drop in hospital-associated sepsis cases among its member hospitals over the past three years. There was an 8% decline in sepsis-related mortality and 7% drop in readmission rates. Madeleine Biondolillo, MD (Vice President of Quality Innovation, Premier) said:

“Much like choking or a heart attack, sepsis is a medical emergency that requires prompt action – and our findings show that hospitals are proactively responding and saving lives.”

However, Premier also found that patients who develop sepsis in the hospital are 10% more likely to experience the worst kind, septic shock, raising the average per-case cost of treating the infection by 20% to $70,000. These findings should prompt a reexamination of the sepsis protocols. Observed Dr. Biondolillo:

“While significant progress has been made, there is opportunity to reexamine protocols for patients who develop sepsis after being admitted for another medical reason, as this suggests a complication of care.” 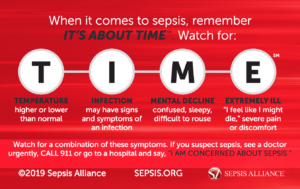 How do you think sepsis care can be improved?

Disclosure: Gina Pugliese RN, MS, FSHEA, who was Vice President Emeritus, Premier Safety Institute, was a member of the advisory board of the Physician-Patient Alliance for Health & Safety. Sadly, Gina recently passed away on March 4, 2019, after a long battle with cancer.