Sepsis is not only a medical emergency but also a global health crisis, affecting up to 30 million people a year: 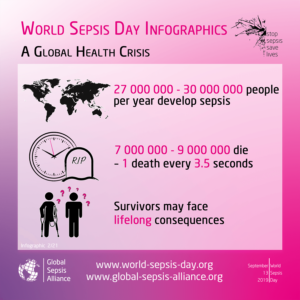 According to the CDC, each year in the U.S., more than 1.5 million Americans will develop sepsis and at least 250,000 Americans will die from sepsis. Moreover, it is estimated by the Sepsis Alliance that the costs related to sepsis are about $27 billion annually:

Sepsis has been named as the most expensive in-patient cost in American hospitals in 2014 averaging more than $18,000 per hospital stay. With over 1.5 million sepsis hospital stays in 2014 per year, that works out to costs of $27 billion each year. Studies investigating survival have reported slightly different numbers, but it appears that on average, approximately 30% of patients diagnosed with severe sepsis do not survive. Up to 50% of survivors suffer from post-sepsis syndrome.

One thought on “For World Sepsis Day, Save a Life”