An outbreak of lung injuries among e-cigarette users across the United States has focused national attention on the potential dangers of vaping, prompting the federal government and some states to take policy steps in response.

According to the CDC, e-cigarettes (also known as e-cigs, e-hookahs, vapes, vape pens, tank systems, or mods) have become extremely popular. The increase in their use may be attributed, among other factors, to the perception that e-cigarettes are not harmful, do not contain nicotine, and may help cigarette smokers quit smoking. 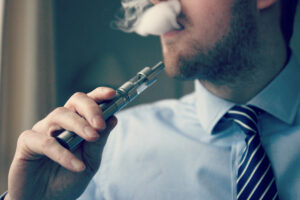 Those believing that e-cigarettes and vapes are NOT harmful for the most part consist of personal experience statements:

However, these believers also cite some studies in support of their position:

Alarmingly, most youth and young adults think that e-cigarettes are safe. According to Pew Research Center, as of summer 2018, only one-fifth of U.S. adults (22%) under age 30 said vaping is “very harmful” to one’s health, compared with 40% of adults ages 30 to 64 and 48% of those 65 and older, according to the same July 2018 Gallup survey.

The believers that e-cigarettes and vaping are NOT harmful can indeed cite research in their support. In a randomized trial conducted by Peter Hajek, Ph.D. et. al., the researchers recruited “nearly 900 people who wanted to quit smoking, and randomly assigned half to receive e-cigarettes and the other half to receive other nicotine replacement products (such as nicotine patches and gum). All of the study participants received weekly individual counseling for four weeks. After one year, smoking cessation was confirmed by measures of exhaled carbon monoxide (which should be low if you’ve quit but high if you’re still smoking).” The researchers concluded:

“E-cigarettes were more effective for smoking cessation than nicotine-replacement therapy, when both products were accompanied by behavioral support.”

Robert H. Shmerling, MD, writing for the Harvard Health Blog analyzed this study and cautioned those into concluding the e-cigarettes are safe and to be used as an aid for smoking cessation:

“while e-cigarette use was associated with nearly twice the rate of smoking cessation, more than 80% of smokers entering this study continued to smoke a year later. One other caveat to note: the e-cigarettes used in this study contained much lower levels of nicotine than found in some common brands used in the US (such as Juul). The importance of this difference is unclear, but a higher nicotine level could contribute a higher rate of addiction to the e-cigarette.”

So, are e-cigarettes safe and should they be used as an aid to smoking cessation?