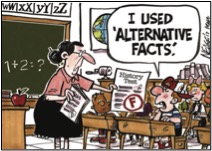 We rely upon science, technology, and modern medicine each and everyday – the cell phone we use to talk and text with our friends and family, the TV we watch to entertain ourselves at night, the aspirin we take to get rid of our headaches, the inhaler we use to relieve our asthma, the eyedrops we use to ease our tired and irritated eyes.

Although all scientific facts should be believed – after all a “fact” is a “fact”, right? – we tend to pick and choose the facts that we want to believe. The Annenberg Public Policy Center of the University of Pennsylvania discussed this selective behavior:

“Gene editing. Vaccinations. Climate change. Genetically modified foods. Zika virus. Nuclear power. Fracking. Nanotechnology. All of these important issues are rooted in science, and to make sound, far-reaching policy decisions about them people should have the best available scientific evidence. Yet many of these consequential issues are enmeshed in political controversy, refracted through the lens of partisan bias, and mischaracterized by media intermediaries.”

This selectivity is a paradox. Dietram A. Scheufele, (Professor of Science Communication, University of Wisconsin-Madison) explains:

“We’re in a world where there are deep paradoxes. On the one hand, we have the Microsofts and the Googles; we rely on science and technology for our iPhones, for our medicine, for our military strength, for our national security, and for unparalleled economic growth. But at the same time, we’re a country where the public buy-in to evolution, for instance, is among the lowest in the developed world, and where we have routinely pushed back against technology based on incorrect scientific information about issues ranging from vaccines to GMOs [genetically modified organisms].”

How much of this “picking and choosing,” which occurs in each of us, tends to coincide with our political beliefs. A survey by the Pew Research Center found that Democrats and Republicans differ over the role and value of scientists in policy debates:

In other words, what “facts” a person believes is a reflection of that person’s beliefs:

“The issue is that when it comes to facts, people think more like lawyers than scientists, which means they ‘cherry pick’ the facts and studies that back up what they already believe to be true. So if someone doesn’t think humans are causing climate change, they will ignore the hundreds of studies that support that conclusion, but latch onto the one study they can find that casts doubt on this view. This is also known as cognitive bias.”

The Dangerous Rise of Pseudoscience or the “Alternative” Fact

Added to this cognitive bias is the dangerous rise of pseudoscience or the “alternative” fact – i.e. some people are deliberately promoting false facts. Consequently, figuring out whether A or B is correct has become more difficult.

The Rise and Further Rise of Pseudoscience

Pseudoscience “consists of statements, beliefs, or practices that are claimed to be both scientific and factual but are incompatible with the scientific method. Today’s society, although reliant each and everyday on scientific, technology, and medical facts, is rife with pseudoscience.”

Pseudoscience is thriving because:

How To Identify Pseudoscience

There are two ways to identify pseudoscience:

#1: Understand the Messenger – the bias of the messenger is a key to understanding if what you’re hearing or reading is pseudoscience or bona fide science. This is similar to identifying the snake oil salesman of the past, who just wanted to sell you the snake oil to make money. To understand the modern snake oil salesman, you must start with the messenger. As Robert MacDougall (Associate Professor, History, University of Western Ontario) explains:

“That’s why you can’t fight flat earthers or anti-vaxxers or any other brand of pseudoscience with arguments from authority. If you want to combat false belief, you have to ask, “What work is this belief doing for the person who holds it?” Then you start from there.”

It is very much the same thing as spotting a con artist. As the North American Securities Administrators Association, which is “the oldest international organization devoted to investor protection,” enumerates in their article on how to spot a con artist – “Con Artists Often Push Poorly Understood or Little-Known Products.”

Of course, the modern “snake oil” salesman is not just after money, it can be some other self-benefit, such as power, influence, or even political office.

“Bold statements in multi-syllabic scientific jargon give the false impression that they’re supported by laboratory research and hard facts.

“Magnetic wristbands improve your sporting performance, carbs make you fat, and just about everything gives you cancer.

“Of course, we scientists accept that sometimes people believe things we don’t agree with. That’s fine. Science is full of people who disagree with one another. If we all thought exactly the same way, we could retire and call the status quo truth.

“But when people think snake oil is backed up by science, we have to challenge that. So why is it so hard? …

“Whenever there is money [or power] involved, science gets thrown out the window” [addition added]

How Can Scientists Better Communicate?

For bona fide science to win in the court of public opinion – and, in current times, for the current COVID pandemic to be controlled – science data needs to be better communicated:

It is really hard to beat emotion solely by reciting evidence; you can’t sooth the anxious air passenger next to you by telling him or her not to worry, that he or she is more likely to die in a car crash on the way home from the airport than in the airplane itself. So we need to change the conversation. We need to understand the worldview of people who are rejecting science-based public policy. What are their concerns, what are their fears, and what can we offer them that will meet their needs? We need to find strong emotional arguments. It’s hard for scientists, but it is really powerful, and something that I don’t think we do enough of.

For example, we all know that eating fruits and vegetables are good for you, but not all of us do it. Illustrating healthy eating by saying that filling at least half your plate with fruits and veggies is a good way to remember how to eat the recommended 4 ½ cups of each per day:

While COVID sheltering at home is unpleasant, we need to recognize that and  “counterbalance” the physical and psychological effects of social distancing by recommending other activities.

“‘Scientists aim at making universal claims, and their style of writing tends to be as impersonal as possible, In the humanities, on the other hand, the emphasis tends to be on originality, individuality and argumentation, which makes the use of first person more common.”

Science needs to use an active and personal voice, if it is to be heard above the din of social media misinformation. In these COVID times, increasing personal safety is better phrased in simple steps:

Just 3 small things each of us can do to promote health and safety: 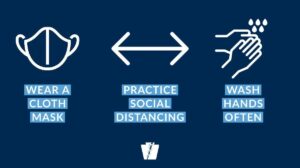 Do the right thing – don’t let misinformation and “snake oil salesmen” guide you.