According to the CDC[1], the maternal death rate in the U.S. has more than doubled since 1987. 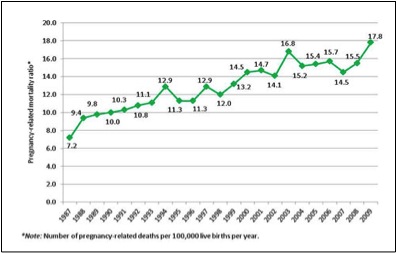 William M. Callaghan, M.D., M.P.H. (senior scientist for the maternal and infant health branch in CDC’s Division of Reproductive Health at the National Center for Chronic Disease Prevention and Health Promotion) says this trend may actually be under-reported:

According to a CDC study[2] the leading causes of maternal death are: hemorrhage, hypertensive disorder, pulmonary embolism, amniotic fluid embolism, infection, and pre-existing chronic conditions (such as cardiovascular disease).

Examining the issue more in-depth, research by Dr. Callaghan and his colleagues at the CDC[3] published in Obstetrics & Gynecology found that pregnant women are facing an increasing number of complications.

Steven Clark, MD, medical director of women and newborn services at the Hospital Corporation of America, says more must be done to prevent these increasing complications. “Because the causes of morbidity are so many and so varied, it’s critical that we identify the ones that are amenable to nationwide systemic prevention efforts,” he says. “Venous thromboembolism is exactly such a cause.  Research has shown repeatedly that pregnancy is a major risk factor for venous thrombosis and pulmonary embolism, especially following cesarean delivery.  At the same time, many cases of post-cesarean pulmonary embolism can be prevented with the prophylactic use of pneumatic compression devices or heparin. That connection needs to be made at the national level, and that’s why HCA strongly advocates the universal use of prophylactic compression devices or heparin for all women undergoing cesarean delivery.”

Research suggests that patients delivering by C-section are at particularly high risk for venous thromboembolism (VTE)[4] – a patient population identified in the landmark Annals of Internal Medicine study, “Trends in the Incidence of Venous Thromboembolism During Pregnancy or Postpartum: A 30-year Population Study.”

Mary D’Alton, MD, professor of obstetrics and gynecology in the Department of Obstetrics and Gynecology at Columbia University) believes that common and preventable causes of maternal death need to be addressed.

“Though research shows that certain patient populations are especially at risk for pregnancy-related deaths and complications, no woman is immune from them,” she says.  “Especially in the first few days after delivery, otherwise healthy patients are at risk for hemorrhage, hypertension and pulmonary embolism. Pulmonary embolism lends itself to prevention measures that have been shown to work in other countries. Here at Columbia University Medical Center and New York-Presbyterian Hospital, we advocate the use of sequential compression devices as well as heparin for all patients undergoing cesarean delivery. The challenge before us is to reduce preventable maternal deaths and morbidity. It’s absolutely vital that hospitals adopt standardized preventative and treatment measures for all pregnant women. Multiple national organizations are collaborating to achieve this goal, and it is hoped that all healthcare facilities will participate in this effort.”

As Dr. D’Alton suggests, standardization of procedures could help prevent complications and death for women delivering by caesarean section and vaginally. It is with this goal that Drs. Callaghan, Clark, and D’Alton have recently teamed up with the Physician-Patient Alliance for Health & Safety which, along with leading healthcare experts and patient safety advocates, is now developing a succinct checklist targeting VTE for new and expectant mothers. For more on this initiative, please click here.