The Institute for Healthcare Improvement (IHI) held on January 22, 2014 a special webinar for the Perinatal Improvement Community on safety recommendations for maternal patients. You can download the webinar recording and slides here.

Maternal death rate in the USA has more than doubled in the last 25 years and data from the Centers for Disease Control and Prevention (CDC) show that pregnancy-related mortality is rising in the United States. 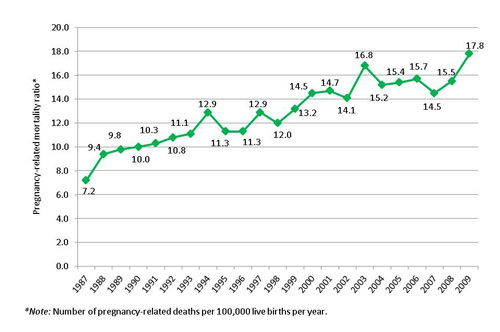 “The United States is down close to the bottom of the top fifty,” says Mr. Wong when looking at maternal death rate compared by country, with 21 deaths per 100,000 live births in 2010. This ranking is particularly alarming because the U.S. spends more money per capita for maternity care than any other country.

There has been “an eight-fold increase in the maternal age group 35 and older in the last thirty to forty years,” says Dr. Cherouny. “Not surprisingly, just like all of us, as we age, underlying diseases tend to present themselves, particularly related to pregnancy sometimes,” he explains. 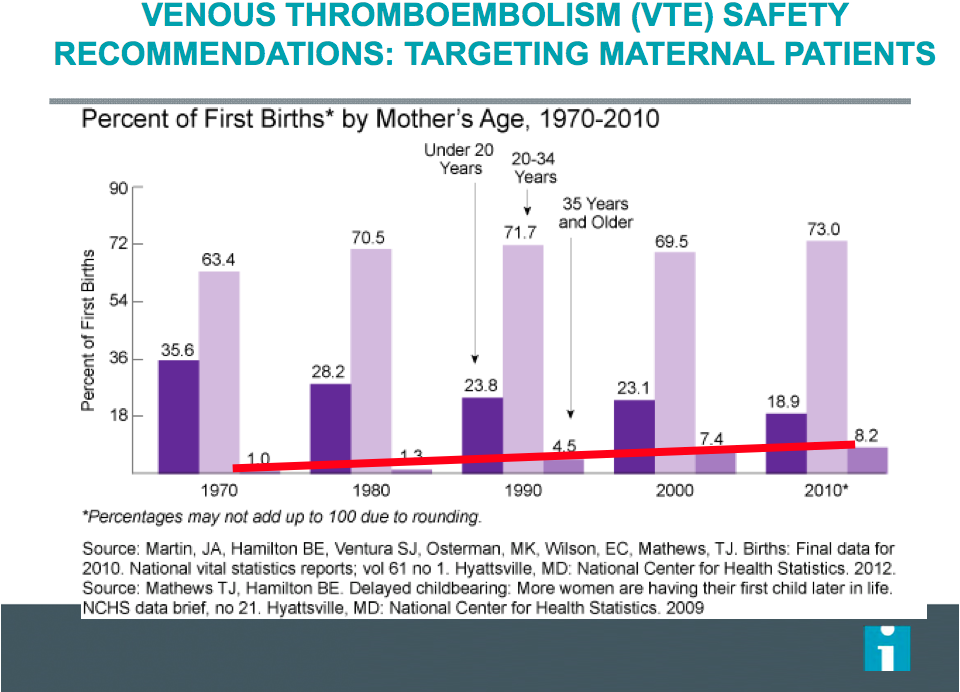 “Of course, an important contributor to that has been the operative delivery rate. We know that has gone up over 50 percent just in the last decade and about 60-65 percent in the last 15 to 18 years,” says Dr. Cherouny. According to Dr. Cherouny, surgical intervention increases the relative risk of thromboembolic phenomenon for obstetric patients, who due to pregnancy, are at a four- to five-fold increased relative risk. 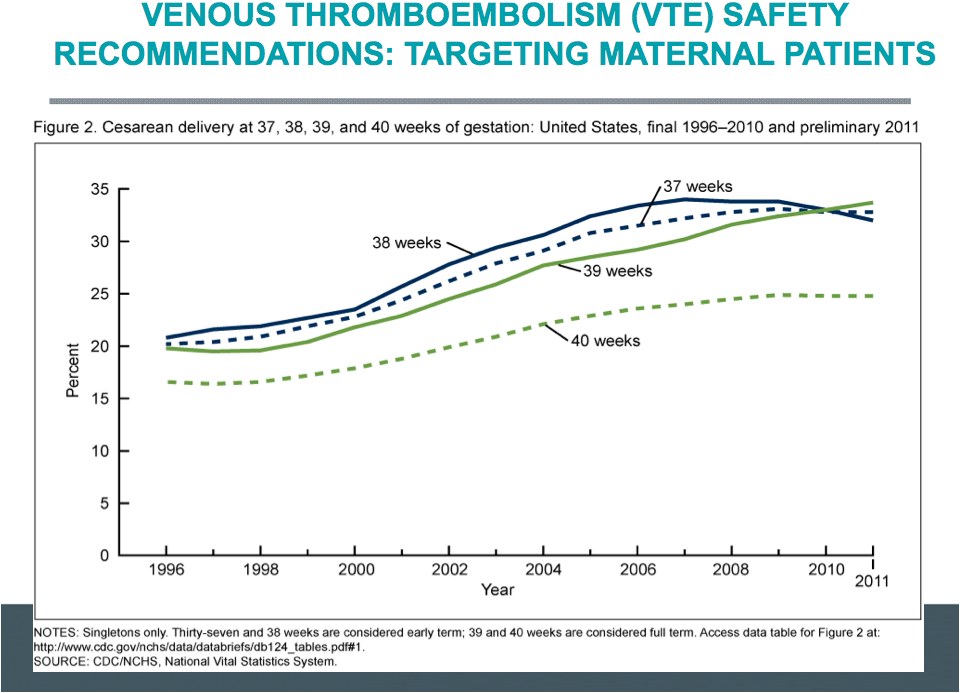 Venous thromboembolism (VTE) costs the health care system more than $1.5 billion per year, according to research in 2009 by Dobesh PP, published in Pharmacotherapy.

“One patient is one too many,” says Mr. Wong. “This is the true reason for advocating for OB VTE prevention.”

In 2012, Amber Scott was found unresponsive by her husband. After determining that Amber had a blood clot in her brain, doctors performed an emergency c-section. 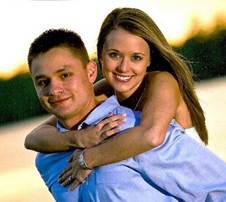 “Thankfully a beautiful baby girl was born,” continues Mr. Wong. “But unfortunately, Amber was in a coma.”

Amber came out of the coma many weeks later and is still going through rehabilitation more than a year and a half later.

Amee VanTassell, age 36, “tragically died of a blood clot four days after delivering her baby daughter from c-section,” according to Mr. Wong. Several other patients have been similarly impacted by preventable VTE such as Samara McAuliffe, Lisa Boyd, and Jessica Phillips. 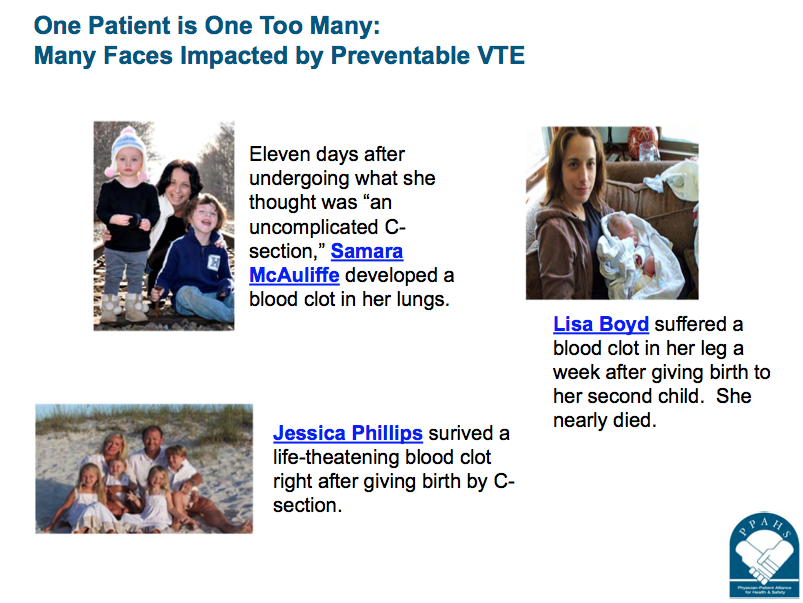 Cesarean delivery a contributing factor to risk for VTE

“From a gynecologic standpoint, when we look at surgery alone, we know that about literally—this always surprises me when I look at it—in non-prophylactic patients undergoing significant gynecologic surgery, 15 to 40 percent of them develop a DVT [deep vein thrombosis]. So it’s not surprising that the risk factors are there and can be translated to the obstetric community with the increased cesarean surgical rate that we’ve seen.”

Continues Dr. Cherouny, “overall the data pool showed a non-significant difference between route of delivery and maternal death when you excluded pulmonary embolism.”

“In other words,” Dr. Cherouny explains, “if we were perfect in our prevention for venous thromboembolism and pulmonary embolism, we may see a dramatically different overall risk association, particularly with our operative deliveries.” This is clinically significant.

“Essentially every patient is at moderate risk. The only exceptions to that would be patients who have surgery less than 30 minutes who are under 40 who have no other risk factors. I would make the argument that no patients are low risk.”

As Dr. Cherouny explains, even though some cesarean surgeries are performed in less than 30 minutes, the VTE risk clock starts during induction of anesthesia.

“If you take that into account,” Dr. Cherouny says, “there is really no case of a patient in the low risk category undergoing a cesarean section.”

Because the vast majority of patients undergoing operative delivery are at moderate or high risk for VTE, Dr. Cherouny says that it is important for providers to take the necessary steps to prevent VTE from taking place.

“All patients having a cesarean delivery should have pneumatic compression devices placed prior to surgery.”

The PPAHS, in collaboration with the IHI and the National Perinatal Association, announced in December the compilation of VTE safety recommendations.

The recommendations, compiled by a panel of health experts, give providers a step-by-step checklist to help assess all OB patient’s risk for VTE and identify the appropriate prophylaxis regimen to improve health outcomes for maternal patients.

You can download a checkable version of the OB VTE Safety Recommendations Checklist here.