Achieving patient safety is the watchword for this week’s Must Reads.

The Joint Commission’s 2015 National Patient Safety Goals were released. Although TJC says that it has “no new Goals for 2015”, it is probably a good presentation for all healthcare facilities to look at to make sure they are meeting these objectives. 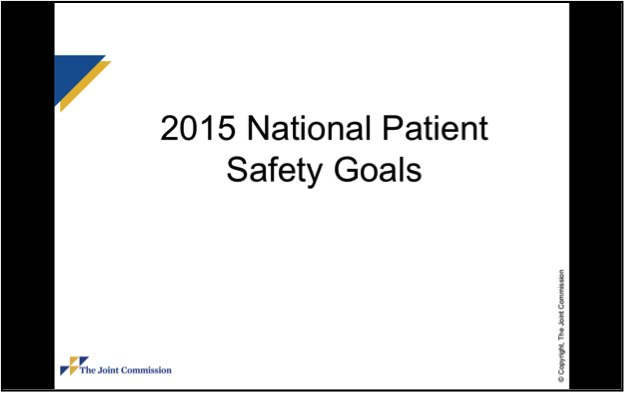 The first two articles may help achieve better patient safety. The latter two were shared by the Twitter health care and patient safety community – many thanks for making these Must Reads a collaborative effort.

Using Capnography to Effectively Measure How Patients Are Breathing

Glendale Adventist Medical Center is committed to providing the highest quality of care. Our widespread use of capnography to monitor the breathing of patients who are being sedated is in line with the latest requirements from the ASA [American Society of Anesthesiologists] and underscores our dedication to patient safety.

“As leaders in ensuring evidence-based care, CNSs have an important role to play in reducing the potentially dangerous and deadly problem of alarm fatigue,” said NACNS 2014 President Les Rodriguez, MSN, MPH, RN, ACNS-BC, APRN. “Our toolkit was developed by a group of national experts whom NACNS convened to address this important issue and provide resources that will help nurses across the country combat this problem. It is intended to help guide their efforts to improve patient safety and quality of care. The toolkit includes everything a CNS needs to work collaboratively with an interprofessional team to assess the clinical environment, and then develop implement and evaluate appropriate interventions.”

New Rules to Curb ‘Epidemic’ of Cesarean Births in Brazil

New Rules to Curb 'Epidemic' of Cesarean Births in Brazil- 84% of births covered by health plans are C-section http://t.co/4fX0RLGrBX

Hat tip to @MinasIntl for sharing this article on Twitter. Dr. Peter Cherouny said in a past webinar “no patients are low risk” when it comes to cesarean delivery and venous thromboembolism.

“After a while, alarms stop being so alarming.”

Hat tip to @comunikator and others for sharing this article on Twitter.