In this article which was published in Healthcare Business Today, Michael Wong, JD (Founder and Executive Director, Physician-Patient Alliance for Health & Safety) makes the case for continuous surveillance monitoring and real-time analytics.

The successful implementation of continuous surveillance monitoring may have substantial patient benefits. Unfortunately, analyzing notifications from individual medical devices, reliance on physical spot checks of patients, and the lack of rules-based advanced analytics to assess a patient’s current condition in real-time or to identify signs of deterioration is a goal that many hospitals and health systems still have not attained.

END_OF_DOCUMENT_TOKEN_TO_BE_REPLACED

Maria Cvach, DNP, RN, FAAN, who is director of policy management and integration for Johns Hopkins Health System, recently spoke with the Physician-Patient Alliance for Health & Safety (PPAHS) about the experience of John Hopkins Hospital in improving patient safety and reducing alarm fatigue. 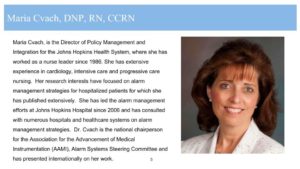 In a clinical education podcast that was released on PPAHS’s YouTube Channel, Ms. Cvach discussed how John Hopkins Hospital was ahead of the curve in managing alarm fatigue, which became The Joint Commission proclaimed as a national patient safety goal in 2014. Johns Hopkins Hospital had formed an alarm management committee in 2006:

END_OF_DOCUMENT_TOKEN_TO_BE_REPLACED

ECRI Institute’s Marc Schlessinger, RRT, MBA, FACHE, who is senior associate at their applied solutions group, recently spoke with the Physician-Patient Alliance for Health & Safety (PPAHS) on how to improve alarm management. The interview can be heard on the clinical education podcast, “Improving Patient Safety and Reducing Alarm Fatigue: The Right and Wrong Way to Use Continuous Surveillance Monitoring.”

END_OF_DOCUMENT_TOKEN_TO_BE_REPLACED

Recently, ECRI Institute released its Top Ten Technology Hazards for 2018. The purpose behind ECRI’s yearly list is to promote the safer use of technology:

The safe use of health technology—from beds and stretchers to large, complex imaging systems—requires identifying possible sources of danger or difficulty with those technologies and taking steps to minimize the likelihood that adverse events will occur. This list will help healthcare facilities do that.

Number 4 on this list deals with how Missed Alarms May Result from Inappropriately Configured Secondary Notification Devices and Systems:

END_OF_DOCUMENT_TOKEN_TO_BE_REPLACED

Mr. Welch is a Clinical Engineer with 17 yrs experience in hospitals and over 24 yrs as an executive in the medical device industry. His focus has been on applying technologies to improve patient safety through continuous surveillance monitoring. Mr. Welch has ten patents and articles in the field of wireless physiologic monitoring, surveillance systems and alarm management. He regularly contributes to the AAMI Foundation on alarm safety and is a voting member on a number of International Standards committees.

Early detection of physiologic deterioration is essential in improving patient safety in acute care hospital settings.  Patients in non-ICU settings who are recovering from surgery or special procedures are especially vulnerable because of private or semi-private room settings prevents direct observation and nurse to patient ratios are often 1:6. Experts in Rapid Response Systems (RRS) have arrived at a consensus that strengthening early detection through continuous monitoring is essential in improving the effectiveness of RRS but only if such systems do not impose a burden on the clinical staff. The high incidence of nuisance alarms and cost are two of the major barriers preventing broader adoption of continuous monitoring on the general care floor. END_OF_DOCUMENT_TOKEN_TO_BE_REPLACED

As founder and executive director PPAHS, when I speak at conferences about the Physician-Patient Alliance for Health & Safety support for continuous electronic monitoring of patients receiving opioids, I am often asked two questions:

END_OF_DOCUMENT_TOKEN_TO_BE_REPLACED

This week in #patientsafety, PPAHS Founder and Executive Director Michael Wong, JD, penned an article for Healthcare Business Today on what makes “good” hospital leadership. From around the web, a study looks at the relationship between readmission rates and caregiver involvement in discharge discussions. Another study looks at factors associated with alarm response time. And a doctor asks if her peers have noticed an increase in inquiries about NSAIDs with growing awareness of the opioid epidemic.

“Good” Hospitals Require Real Leaders. How can you tell the difference between a “good” hospital and a “bad” one?

Video Analysis of Factors Associated With Response Time to Physiologic Monitor Alarms in a Children’s Hospital. Nurses who responded faster included those who were earlier in their shifts, had less than 1 year of experience, previously responded to an alarm requiring intervention, were caring for only 1 patient, and were responding to an alarm for lethal arrhythmia.

More information on NSAIDs & CV risk. A doctor looks at research on the cardiovascular risks of NSAIDs as patients appear to ask about them more frequently.

This week in #patientsafety, we released a video that summarizes experiences of clinicians in improving opioid safety in their hospital or healthcare facility, and reminds us of the tragic consequences of adverse events and deaths that may ensue if clinicians and healthcare executives are not proactive in promoting safety. From around the web, a look at alarm fatigue, pre-surgical counselling on opioid use, and reactions to a sepsis awareness campaign.

How Redesigning The Abrasive Alarms Of Hospital Soundscapes Can Save Lives. Alarm fatigue continues to be a problem at hospitals.

Here’s something that curbs opioid use: Pre-surgical counseling. This surgeon shows a video on opioid safety to patients before undergoing surgery, and says it works at reducing opioid use.

This week in #patientsafety, we shared an article on opioids in dentistry by Bradley Truax, MD. Outpatient Surgery covered our position statement on patient ambulation. From around the web, NPR wrote about dentists working to use fewer opioids, a hospital reduced nuisance alarms by 30%, and The Joint Commission issued a new Sentinel Event Alert on developing a culture of safety.

Patient Safety Tip of the Week: Dental Patient Safety. As part of our efforts to bring in expert viewpoints from across the #patientsafety community, we have reposted an article on dental patient safety (with permission).

Sentinel Event Alert 57: The essential role of leadership in developing a safety culture. “Competent and thoughtful leaders contribute to improvements in safety and organizational culture,” says The Joint Commission.