This week’s must-reads range from a mother who died and was revived after blood clots to a call for better middleware from device manufacturers to combat alarm fatigue.

Also worth noting, PPAHS founder and executive director Michael Wong, JD, presented at the International Stroke Conference (ISC) on new ways to reduce stroke, a leading cause of death and disability in the U.S.

Incorporating research from a group of leading neurological health and patient safety experts brought together by PPAHS, the PPAHS Stroke VTE Safety Recommendations aim to help reduce death and disability among stroke victims due to venous thromboembolism (VTE).

Armonk Daily Voice reports that White Plains Hospital in White Plains, New York, has been part of the Safe Motherhood Initiative to decrease morbidity and mortality during pregnancy and childbirth.

One week after giving birth to a son, Naesha Parks was hospitalized at age 35 when blood clots formed in her lungs.

Read her story of death and revival here.

Teofilo Lee-Chiong, MD, penned a feature in Advance Healthcare Network for Respiratory Care and Sleep Medicine that discusses the risks of obstructive sleep apnea (OSA) during pregnancy. Topics include:

An Alarming Problem with Medical Technology

Medical Design Technology Editor-in-Chief Sean Fenske wrote about his visit to the ECRI Institute, which has named alarm hazards as its #1 concern for the past four years.

According to ECRI Senior Associate Rikin Shah, who Fenske interviewed for the piece:

“Medical device manufacturers need to start developing smarter alarms, and start creating alarms so that the algorithms start thinking like clinicians would, though there are some restrictions that the vendors have in how they manufacture their products. We need to start looking toward trends that start combining multiple parameters — start looking at some other industries to find common grounds, such as airlines.”

An article published in Anesthesiology News shares findings that the accuracy of adverse event data collected in reporting systems increases when the systems protect the anonymity of the reporter.

“Fear of punitive measures may discourage providers from accurately reporting adverse events when quality data is used to evaluate their performance.” 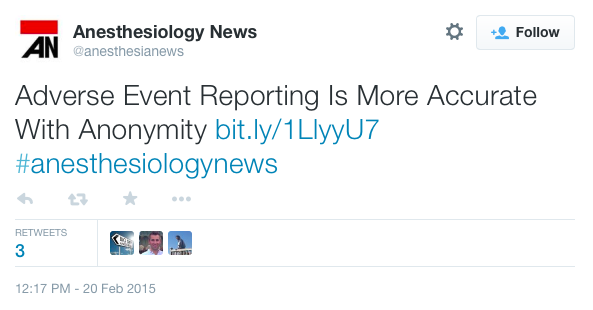