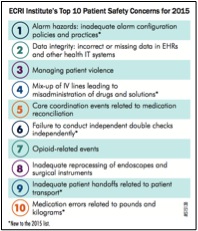 We could think of no better “must read” than this, and have highlighted just two of the 10 patient safety concerns below:

“Our accident investigations have found that hospitals have either not had consistent or not had any practices to determine how alarms are set by care area or by patient type,” says James P. Keller, MS, vice president, health technology evaluation and safety, ECRI Institute. For example, “it doesn’t make sense to use the same default alarm settings in pediatric intensive care as in adult intensive care,” he explains, yet ECRI Institute has found that many hospitals do not have a policy to adjust the alarm default settings by care area. Similarly, hospital policies often fail to specify when and who can make adjustments to the default alarm settings, says Keller.

“The use and the prescribing of opioids has significantly increased in recent years,” says Stephanie Uses, PharmD, MJ, JD, patient safety analyst, ECRI Institute PSO, and “that’s one of the reasons opioid safety has become more of an issue.” According to the U.S. Department of Health and Human Services’ National Action Plan for Adverse Drug Event Prevention, the number of prescription opioids dispensed doubled between 1999 and 2010, and by the end of that period, the number of related deaths exceeded the number of overdose deaths involving heroin and cocaine combined. The number of ED visits related to opioid misuse and abuse totaled more than 420,000 in 2011—double the number of visits in 2004.

Problems related to opioid overdose, such as over-sedation and respiratory depression, are a major patient safety concern, but they are not the only ones. Other issues include gastrointestinal adverse events (e.g., nausea, vomiting, constipation), hyperalgesia, pruritus, and immunologic or hormonal dysfunction.

ECRI says problems related to opioid overdose, such as over-sedation and respiratory depression, are a major patient safety concern Click To Tweet