Our must reads for this week focus on 5 key tips, which if followed, could save a life.

As well, if you tweet about patient safety, a big “thank you” – see if your name appears below in our retweet shout outs.

According to a new study funded by the U.S. Department of Health and Human Services’ Agency for Healthcare Research and Quality (AHRQ), “When doctors, nurses and other hospital operating room staff follow a written safety checklist to respond when a patient experiences cardiac arrest, severe allergic reaction, bleeding followed by an irregular heart beat or other crisis during surgery, they are nearly 75 percent less likely to miss a critical clinical step.” 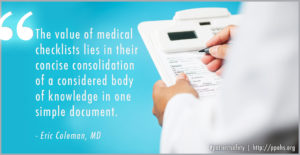 22-year-old Brianne Grimm died of a pulmonary embolism. Brianne’s sister shared her tragic story in the hope that others may not suffer an undiagnosed blood clot. Although the article may be helpful for patients and their families, Brianne’s doctor failed to make a diagnosis:

My 22-year-old sister Brianne Grimm was feeling under the weather. She was coughing quite a bit, but so were the rest of us. She rode it out as long as she could, but then the shortness of breath came and the muscle spasms and leg pain …

Brianne went to the doctor three times in total. She was frustrated and wanted relief, wanted someone to take her seriously.

Three days later she died at her home of pulmonary embolism.

If only we would have known the risks and symptoms of deep vein thrombosis (DTV) and pulmonary embolism (PE), we could have advocated her care. Not only do we need more education for ourselves to become our own advocates, but we need our physicians to become more educated on this issue. A young life is gone and this story happens all too often.

Basavana Goudra, MD (Assistant Professor of Clinical Anesthesiology and Critical Care, Perelman School of Medicine, University of Pennsylvania) and his colleagues compared the depth of sedation between propofol and non–propofol-based sedation during colonoscopy. They concluded:

The depth of sedation provided by propofol during colonoscopy may be greater than necessary, according to researchers who objectively monitored it in their patients.

By revising drug library limits for specific medications, it was possible to decrease the number of less clinically meaningful alerts, reduce alert fatigue, and thereby increase the effectiveness of the smart infusion pumps. This added another layer of safety to patient care.

Health information technology (health IT) is rapidly evolving and its use is growing, presenting new challenges to health care organizations. This alert builds upon Sentinel Event Alert #42 on safely implementing health information and converging technologies (published in 2008) to take a broader look at health IT, particularly the socio-technical factors having an impact on its safe use. This alert’s suggested actions center on safety culture, process improvement and leadership.

@josephroymiller perhaps says it best when retweeting about the Case for Continuous Monitoring:

Hats off to @Havor198743, @Atuaturivess265 and @opapaapap for retweeting about the podcast by on the risk of blood clots after cesarean delivery.