“In the United States, 70 million patients are prescribed opioids for postsurgical pain each year. Of those patients, one in 15 will go on to experience long-term use or abuse.”

“If we specifically look into spine, there have been studies that have shown a year after elective spine surgery, one-third of all patients are still using opioids and 18 percent of those people were not previously taking narcotic medications. This is happening across the board, in elderly patients and in young patients.”

According to the article, the American Society of Anesthesiologists advises physicians to shift toward “a multimodal approach to pain management”, beginning with local anesthetic when possible.

According to Dr. Quereshi:

“We have to understand that a unimodal approach to pain treatment can’t be expected to provide efficient pain relief.”

A multimodal approach would include non-opioid medications including Nonsteroidal Anti-inflammatory Drugs (NSAIDs).

Others have advocated for combining both pharmacologic and non-pharmacologic interventions to attack more than one underlying pain mechanism.

According to Ms. Pasero:

Outside the clinic, opioids can be equally troublesome. A report by Trust for America’s Health and the Robert Wood Johnson Foundation revealed the extent of drug misuse and abuse.

Drug overdose deaths are now the leading cause of death from injury in the United States and every year, nearly 44,000 people die from drug overdose. 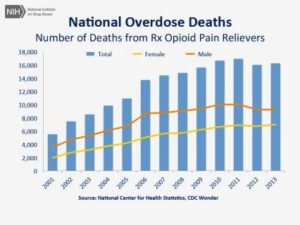 Given these staggering challenges, multimodal pain management plans hold promise, but not without drawbacks.

Choll Kim, MD, Associate Clinical Professor of Orthopaedic Surgery, Spine Institute of San Diego, explained that interventions such as NSAIDs are “not nearly as potent as a narcotic”, and that gastric acid can present issues and an increased risk of bleeding.

For spinal surgeons, NSAIDs are problematic because they inhibit fusion.

According to Dr. Kim:

“In an effort to decrease our reliance on powerful narcotics, we don’t have a single drug that can replace them. Therefore, we are replacing them with multimodality therapy strategies. One of those components includes NSAIDs, and those can be used safely in certain doses and for certain time periods.”

But the challenge remains. How can clinicians reduce America’s dependence on opioids, and should they do so?

What do you think? Can physicians reduce dependence on opioids through multimodal approaches to pain management?