A recent HealthDay/Harris Poll found that most “Americans now support aggressive regulation to keep health care costs in check — including price caps on drugs, medical devices and payments to doctors and hospitals”.

Christopher P. Molineaux, president and CEO of Pennsylvania Bio, in an opinion piece for Penn Live says that the healthcare insurance system may be a driving force behind costly hospitalizations, emergency room visits and expensive medical procedures, which, coupled with restricted access to treatments, can lead to adherence issues, which leads to reliance on acute care.

“It’s a vicious cycle,” says Mr. Molineaux, who also points out that, since 2000, more than 500 new treatments and cures have been brought to market, that over 7,000 medicines are being developed globally.

“Unfortunately, the public discourse on prescription drug costs has not reflected these advancements as the debate between the producers of innovation and the payer community has found new energy and new voices.”

Mr. Molineaux says that it takes approximately $2.6 billion to gain one new prescription drug approval and that the development and approval process can take more than 10 years.

Mr. Molineaux notes that the U.S. will spend three times as much on hospital care, or $13.5 trillion, over the next ten years. 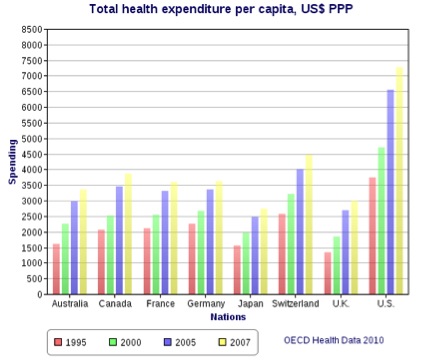 “They also tout teams of ‘clinical professionals’ that conduct reviews of specialty drugs usage, making sure that patients get the “right medication, in the right amount, at the right time.

“Isn’t that the prescribing physician’s job?”

Mr. Molineaux points to cost-sharing mechanisms as a way to distort the cost of prescription drugs:

The insurance system’s cost-sharing structure reinforces acute care, which, coupled with restricted access to treatments which can leads to adherence issues, which, in turn, leads to reliance on acute care.

“Obviously, the current model is not sustainable,” says Mr. Molineaux.

A report by Express Scripts saying that non-adherence is America’s most expensive health care problem, and that the United States wastes more than $300 billion each year treating unnecessary medical complications:

“Health insurance companies need to do their part, as well. Coverage and cost-sharing policies should keep pace with innovative treatment advances and recognize the long-term value of adherence to medicines.

“Ultimately, the patients we all serve deserve nothing less.”

However, Humphrey Taylor, chairman emeritus of The Harris Poll believes that responsibility is shared:

“While many people have seen, heard or read recent reports about large drug prices, and most people think drug companies are to blame for the high cost of care, they also believe that there is a lot of blame to be shared. The system as a whole, the way providers are paid, doctors, hospitals, and the Affordable Care Act are all seen to be partly responsible.”

At Physician-Patient Alliance for Health & Safety, we have written about the cost implications and return on investment of patient safety interventions, so we wanted to share with you the op-ed, which looks at healthcare costs from a different perspective.

Do you agree with Mr. Molineaux or Mr. Taylor? What do you think would be the patient safety implications of a different healthcare insurance system? Leave your thoughts in the comments below.

One thought on “Who’s Responsible for Keeping Healthcare Costs Down?”