Editor’s note – This article, “Three Tips For Decreasing Alarm Fatigue” is reprinted with the permission of Internal Medicine News and Hospitalist News, which publishes “news and views that matter to physicians”.

When patient monitor alarms sound too many times, this can discourage using the very monitors that are intended to keep patients safe and inform clinicians of a patient’s physiological state. However, research shows that using “smart alarm” technology and getting smart about alarm monitors can reduce clinically insignificant alarms.

According to Paul M. Schyve, M.D. (Senior Advisor, Healthcare Improvement at The Joint Commission) says, “There is uniform agreement that alarm fatigue is a major problem.  Alarm systems are built into many medical devices, such as infusion pumps and ventilators. When they work as intended, they alert caregivers that a decision or action is required for the patient’s health and safety. However, too many alarms, including false alarms, can fatigue, confuse, and overload clinicians.”

It is therefore no surprise that alarm fatigue has yet again been designated as the number one health technology hazard for 2013 by ECRI Institute, an independent, nonprofit organization that researches the best approaches to improving the safety, quality, and cost-effectiveness of patient care.

ECRI conducted an analysis of the Food and Drug Administration’s database of adverse events involving medical devices and found 216 deaths nationwide from 2005 to the middle of 2010 in which problems with monitor alarms occurred. This number of deaths is thought too low, because of underreporting by the health care industry. ECRI found 13 more cases in its own database, which it compiles from incident investigations on behalf of hospital clients and from its own voluntary reporting system.

“Alarms provide a technological safety net,” observes Maria Cvach, RN, MSN, CCRN (assistant director of nursing and clinical standards at The Johns Hopkins Hospital). “Reliance on physiological monitors to continuously ‘watch’ patients and to alert the nurse when a serious rhythm problem occurs is standard practice on monitored units. Alarms are intended to alert clinicians to deviations from a predetermined ‘normal’ status.”

However, alarm fatigue may occur when the sheer number of monitor alarms overwhelms caregivers.  “When alarm frequency is high, nurses are at risk for becoming desensitized to the alarms that are intended to protect their patients,” says Ms. Cvach.

Below are three tips to help reduce false alarms:

“Nurses in intensive care units stated that the primary problem with alarms is that they are continuously going off and that the largest contributor to the number of false alarms in intensive care units is the pulse oximetry alarm,” says Ms. Cvach. “A ‘smart alarm’ that analyzed multiple parameters, like oxygenation and adequacy of ventilation, in a patient’s condition, may be a solution. This would increase patient safety by making it easier for nurses to assess a patient’s condition and reduce the frequency of false alarms.”

Using Ms. Cvach’s example, don’t let the fear of alarms prevent using monitors to assess both oxygenation with pulse oximetry and the adequacy of ventilation with capnography. Using technology that incorporates multiple parameters (such as, etCO2, SpO2, respiratory rate, and pulse rate) into a single parameter would not only make it easier to quickly identify a patient’s status, but would also decrease the number of clinically insignificant alarms.

In their research, Cvach and Creighton Graham were able to decrease critical monitor alarms by 43 percent from baseline. As they explain, one of the changes was to “revise the default settings for the unit’s monitor alarms, including parameter limits and levels, so that alarms that occurred were actionable and clinically significant.”

The chart below summarizes the number of alarms before and after their intervention: 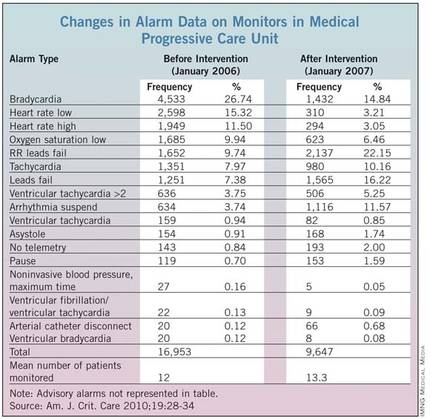 Get “smart” about alarm monitors. Use technology to help reduce false alarms and increase recognition of clinically significant alarms.

One thought on “Three Tips For Decreasing Alarm Fatigue”