(This article first posted on TheDoctorWeighsIn.)

More than six weeks after giving birth, Amber Rabalais Scott held her daughter Adeline Elizabeth in her arms for the first time – a milestone that the family and many friends of the 30-year-old Slidell, La., woman won’t ever forget. 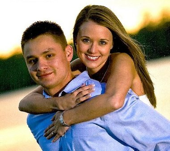 Amber’s story is both heartbreaking and heart lifting—and it illustrates the very real risk of blood clots that new and expectant mothers face.   According to The American College of Obstetricians and Gynecologists[1] (ACOG), blood clots can block blood flow and cause organ damage. Known as venous thromboembolism (VTE), it is a leading cause of maternal morbidity and mortality in the US.

On May 22, 2012, her husband Tommy came home from work and found her unresponsive.  After he called 911, emergency workers rushed his pregnant wife to Slidell Memorial Hospital.  There, after determining that Amber had a blood clot in her brain, doctors performed an emergency caesarian section, and Adeline was born, 6.5 pounds, healthy and beautiful.

Yet while Adeline was thriving, Amber was fighting for her life.  She lay in a coma as doctors performed a series of surgeries to remove the clot in her brain.  Meanwhile, her family and friends prayed that Amber would come out of the coma.  Their prayers were answered in early June 2012, when Amber held up two fingers after being shown a picture of Adeline. 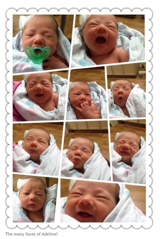 Then, a few days later – July 1, 2012 — she embraced her infant daughter at last.  “Amber held the bottle and fed Adeline,” Tommy recalled. “She knew what to do right away, she grabbed the bottle, and for the first time, Adeline smiled, too.”

More than a year has passed since that remarkable day, but Amber’s saga unfortunately continues. Today, more than a month after celebrating her daughter’s first birthday, Amber remains on the road to recovery.  According to Tommy, Amber continues to make great progress in her daily outpatient therapy sessions. She is now able to pull herself up and stand on her own as she steadily regains strength in both the left and right side of her body.

“We are so proud that Amber has made so many great strides in a short amount of time, and we have complete faith that a full recovery is possible,” he said.

Amber’s progress gives her family and many friends much to celebrate, and they continue to hold fundraising events as she recovers.   In addition, the “Amber’s Prayer Team” Facebook is now “Liked” by nearly 15,000 Facebook fans.  The page tracks Amber’s remarkable improvement in words and pictures. It also describes current and completed fundraising events for Amber, and it provides details about the Amber Rabalais Scott Donation Fund at Capital One Bank. 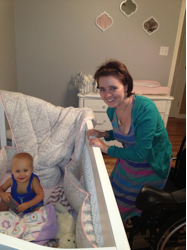 As Amber continues to recover from the blood clot that nearly claimed her life, Tommy hopes that by sharing her story, it will help to increase awareness about VTE and the possible risks of blood clots for new and expectant mothers. As well, he hopes that ACOG’s recommendations will be followed by healthcare professionals across the country, so other mothers and their families may not have to go through what his family and Amber have had to endure.

During pregnancy, blood tends to clot more easily, the medical term for which is hypercoagulability.  As a result, the risk for pregnant women to develop a blood clot is as much as five times greater than it is for non-pregnant  women, according to “Trends in the incidence of venous thromboembolism during pregnancy or postpartum: A 30-year population study”[2] a landmark report published in the Annals of Internal Medicine.

“For pregnant women, the risk of VTE is 4-5 times higher than women who are not pregnant,” says Dr. Andra James (Professor of Obstetrics & Gynecology, Division of Maternal Fetal Medicine, University of Virginia School of Medicine).[3] “Moreover, this risk is at least twice as much following cesarean delivery.”

Although Tommy said that Amber’s doctors could not confirm as to how and why the bleed on her brain occurred, blood clots in pregnant women more often occur in the legs.

“Fortunately,” says Dr. James, “risk factors for VTE can be reduced by simple and cost-effective measures, such as fitting inflatable compression devices on a woman’s legs before cesarean delivery,  using inflatable compression sleeves until the woman is able to walk after delivery or—in women who had been on blood thinners during pregnancy—until anticoagulation medication is resumed.”

To help spread the word about pregnancy and the risk for blood clots, Amber and Tommy Scott have teamed up with the Physician-Patient Alliance for Health & Safety (PPAHS), an advocacy group dedicated to advancing patient health and safety initiatives that significantly impact patient lives.

Together with leading healthcare experts and patient safety advocates, PPAHS is now developing a succinct checklist targeting VTE for new and expectant mothers, created with funding provided by Covidien. For more on this initiative, please click here.

[2] “Trends in the Incidence of Venous Thromboembolism during Pregnancy or Postpartum: A 30-Year Population-Based Study”– Annals of Internal Medicine, Nov. 15, 2005