You can listen to the full recording here, download the slides here, and learn more about opioid safety here.

This article is the first of a two-part series. It summarizes the presentations on opioid safety. The second part will recap the question and answer period with the entire panel.

The Physician-Patient Alliance for Health and Safety teamed up with A Promise to Amanda Foundation to conduct the first-ever national survey on PCA practice.

“Part of the impetus for the survey was the sheer number of respiratory events that occur each year,” says Mr. Wong. 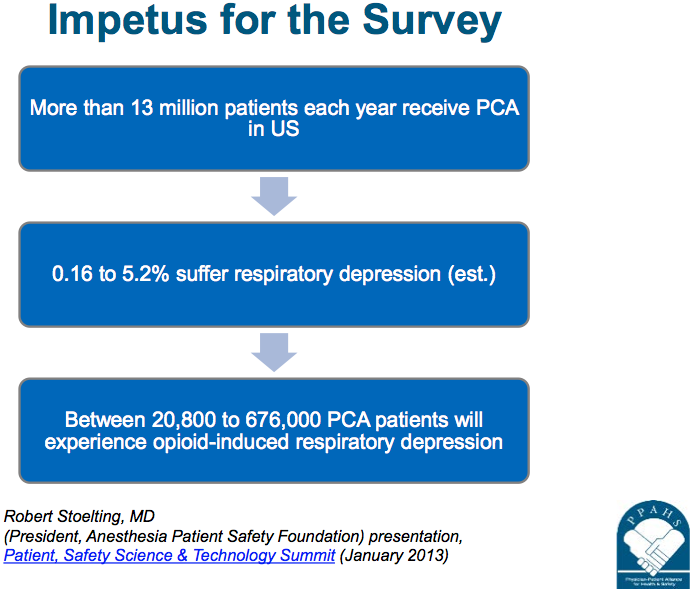 Between 20,000 and 676,000 PCA patients will experience opioid-induced respiratory depression every year.

“However for our purposes, and for A Promise to Amanda, the main impetus is the patients,” Mr. Wong continues. 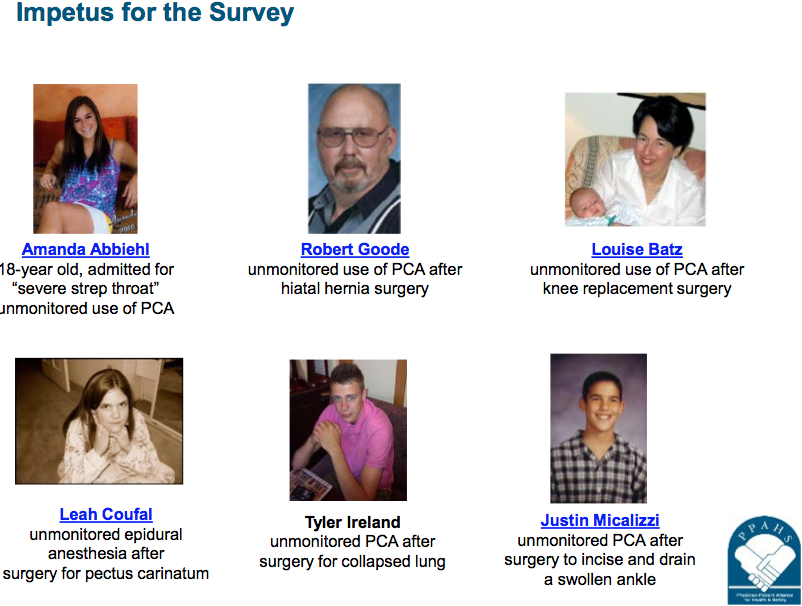 Six patient risk factors have been identified by major health care organizations like The Joint Commission and Institute for Safe Medication Practices (ISMP). These risk factors include:

“The survey results show great variability in the risk factors being considered by hospitals across the country,” adds Mr. Wong.

According to the survey results, less than 40 percent of hospitals are considering all six patient risk factors.

Approximately 70 percent of PCA adverse events are due to errors associated with pump use, according to the Pennsylvania Patient Safety Authority. Double-checks advocated by ISMP and others can prevent errors from happening.

The PCA survey, conducted prior to The Joint Commission’s National Patient Safety Goal on alarm safety, found that 95 percent of hospitals are concerned about alarm fatigue. Almost nine in ten hospitals (87.8 percent) believe that a reduction of false alarms would increase the use of patient monitoring devices like an oximeter or capnograph.

“Hospitals also indicated the value of continuously electronically monitoring their patients receiving opioids,” says Mr. Wong. “All those who reported monitoring said that monitoring reduced adverse events and hospital expenditures, or that it was too early to determine the effect of monitoring.”

Moreover, hospitals using smart pumps with integrated end tidal CO2 (EtCO2) monitoring were almost three times more likely to have had a reduction in adverse events or a return on investment in terms of a reduction in costs and expenses.

The challenge of balancing effective analgesia with safety

Mr. Oglesby was involved in implementing continuous electronic monitoring at St. Joseph’s/Candler Hospitals in Savannah, Georgia, and has spoken about being opioid-related event free for eight years, as well as the return on investment that came with the program.

“We made sure that we used smart pumps to address the appropriate programming of our pumps. We also wanted to assess what would be the best way of monitoring our patients,” says Mr. Oglesby.

The team that drove the continuous monitoring program was initially comprised of pharmacy and nursing staff. Respiratory therapy was called in to address monitoring options early on in the decision making process.

Since the nursing team was new to capnography, and since respiratory therapists were new to pain scales, education was central to the success at SJ/C.

“There were times when we would get calls to the bedside from the nursing staff who would say that this patient’s alarm was going off, and going off for no reason,” says Mr. Oglesby. “When you get to the bedside you would go back and review the patient’s trends and look at the waveforms. You would actually see that the patient had good reason for the alarms going off.”

The respiratory therapists found that patients often experienced undiagnosed sleep apnea and that the patients were having moments of apnea.

“The education at the bedside resulted in the nursing staff becoming really good at using end tidal CO2 to the point that they would take monitors and put them on other patients that weren’t receiving PCA just to do an assessment of those patients.” 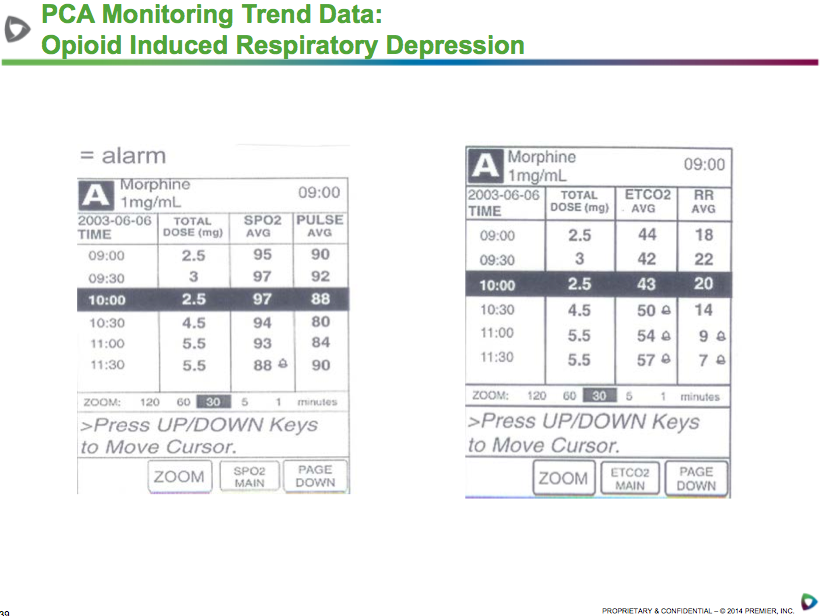 These screens from an actual patient highlight a few key points about the effectiveness of capnography at providing the earliest indication of respiratory compromise.

Mr. Oglesby explains that at 10:30 AM, the screens show, EtCO2 rose to 50, which was outside of the established range, and an alarm sounded. The pulse oximeter alarm did not sound until 11:30.

“This was typical,” says Mr. Oglesby. “We were finding that the end tidal CO2 gave us at least that hour window—gave us an hour earlier indication that something was changing with the patient’s status. So if we just had pulse oximetry, we wouldn’t have known until an hour later that something was really going on with that patient.”

“We truly believe that end tidal CO2 provides us with the earliest indicator of a decline in our patient’s respiratory function.”.