But, before we get to the serious news … a little humor … 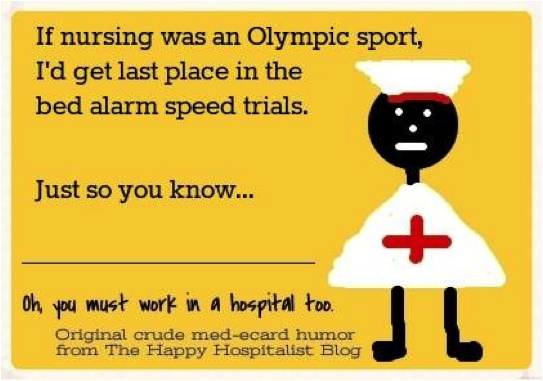 The Alarm vs. Alert Conundrum

Sue Montgomery, RN, BSN, CHPN reminds us about the difference between “alarms” and “alerts”:

The terms “alarm” and “alert” are often used interchangeably, but they’re not the same thing. Alarms usually indicate a potentially life-threatening situation requiring an immediate response and are regulated by the FDA as part of the agency’s oversight of medical devices. By contrast, alerts are usually associated with non-medical devices and don’t indicate an immediate crisis. Some examples include nurse call systems and message notifications.

Alerts might be less critical than alarms, which is why they’re not regulated in the same way, but they both add to the general cacophony nurses face every day. Several studies have found that it’s difficult for most people to differentiate more than six different alarm sounds, but the American Association of Critical Care Nurses says the average ICU nurse must cope with more than three dozen sounds. It’s no wonder that alarm overload or alarm fatigue is becoming epidemic.

According to ECRI, alarm fatigue-reducing technologies and telehealth are among the top 10 technology tools hospital executives should watch for in 2015.

Thanks to @gnayyar, @IVCiLLC, and @iHealthBlog for tweeting about this!

As reported by the Post Register in Idaho Falls, Idaho (note: access to the full article is only for Post Register subscribers), Richard Palmer was the victim of over-sedation after undergoing routine surgery:

Richard Palmer, awoke June 11 feeling well after undergoing routine surgery. He called his daughter at 3:30 p.m. to check in with her following the procedure.

After the operation, a catheter was placed in Palmer’s femoral nerve to administer a local anesthetic — bupivacaine — to manage his pain.

The VA later learned the pump, which regulates how fast the medicine is released, was not assembled properly, leading to the free-flow of the anesthetic for 11 minutes.

According to the medical examiner’s report, Palmer reported feeling anxious and having a tingling sensation in his feet. Then he had a seizure.

Editor’s note: Use of the PCA Safety Checklist may have averted this tragedy. One of the steps to be followed before initiating, refilling, or programming change is to have two healthcare providers independently verify:

Sounds simple – but simple could have saved a life.