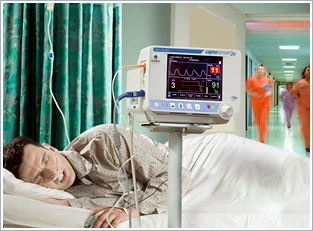 From the inception of the project, continuous electronic monitoring with capnography has been a cornerstone technology to keeping patients at SJ/C safe.  Mr. Oglesby and his team implemented a continuous monitoring program with capnography after identifying a need for reliable, early indication of patient decline in ventilation.  Since the initial pilot, the monitors have shown tangible results:

“There was a couple of ‘aha’ moments when we saw that capnography giving us, sometimes an hour earlier, [indication] of a patient that was getting into distress.”

Effective implementation is crucial whenever new technology is introduced in a clinical setting.  During our interview, Mr. Oglesby speaks to three key learnings to make continuous monitoring with capnography a success.

SJ/C’s pilot program 12 years ago was one of the first to introduce continuous capnographic monitoring outside of the OR, and for a variety of ventilatory statuses.  In order to cover a broader patient population, Mr. Oglesby and his team worked with manufacturers to customize the monitors:

“[W]e saw that the algorithms had to be adjusted to deal with the situation that we were dealing with because we were having alarms and readings that weren’t accurate.

The team at SJ/C also worked on an addition to the nasal cannula to capture and monitor CO2 from the patient’s mouth, in addition to nose.

While capnography technology has advanced over the past decade, work to ensure a seamless integration of monitors and processes remains paramount.  For instance, understanding and adjusting default parameters for the monitors has helped SJ/C reduce nuisance alarms on the clinical floor.  Part of this involves empowering clinicians to adopt a problem-solving mindset during the implementation process.

A turning point for Mr. Oglesby’s team was understanding that opioid-related risk is a potential for all patients:

“And, if you go to the www.PromiseToAmanda.org website, you’ll see that a lot of the patients that had bad, bad outcomes – that didn’t walk out of the hospital – aren’t those patients that would fit into any algorithm that says you need to monitor this patient.

Staff education of these risks was one of the key drivers in adopting capnography for all patients receiving opioids, not just those most visibly at risk.

Education also allowed clinicians on rounds to, in turn, improve patients’ experiences with the monitors.  Mr. Oglesby found that once staff were able to effectively communicate why the monitors needed to be worn, adherence increased.

Implementing a quality improvement (QI) program with new technology as a cornerstone has broad implications for capital outlay.  At SJ/C, a separate team worked to understand the economic impact of implementing the capnography monitors.

During the interview, Mr. Oglesby refers to a study conducted by his colleagues after five years.  They found that from 2002 to 2007, 558 expanded IV-safety systems helped avert 450 highest-risk IV medication errors and respiratory monitoring helped avert at least 35 PCA-related undesirable outcomes, for a total of at least 471 preventable events.  After accounting for the saved cost of potential litigation versus the purchase cost and disposables, they found that a 5-year ROI of more than $2.5 million.

It is notable that the types of events prevented by SJ/C ten years ago have repeatedly made ECRI’s Top 10 Health Technology Hazards to this day.  On ECRI’s 2017 list, ‘Missed Ventilator Alarms’ and ‘Undetected Opioid-Induced Respiratory Depression’ hold the #3 and #4 spots, respectively.

For readers who have not yet listened to our interview with Harold Oglesby, RRT, please click here.