Editor’s Note: We came across a story by Jayne Bissmire, a woman running to raise funds for the UK Sepsis Trust. We were moved by how Jayne tells her story of how sepsis–a life-threatening condition that happens when the body’s response to an infection injures its own tissues and organs–has impacted her life by nearly taking her father from her.

We know now from research that sepsis accounts for more 30-day readmissions and is more costly than heart attacks, heart failure, chronic obstructive pulmonary disease and pneumonia. Behind these numbers-driven research papers, though, are the people whose lives are impacted by the condition.

Here is a first-hand account from one such person. Thank you, Jayne, for sharing your story and that of your father with our community of supporters.

I am running 50 miles for Sepsis, because more needs to be done.

I’m not a natural runner, but I’ve set myself this challenge because I used running to lose weight and it’s all I know how to do to raise money.

In January 2011, my lifelong best friend and housemate lost her granddad to Sepsis due to complications while inserting a catheter, following a short stay in hospital due to Diabetes. Prior to this I’d never heard of Sepsis, Septicaemia or Septic Shock.

He was admitted to hospital on June 2nd following 2 weeks of vomiting which was soon pinpointed to diabetic complications with a foot injury and the need to have two toes amputated, and he went into theatre that night.

In the two weeks following this he was still vomiting, not urinating a tremendous amount, and the hospital continued to treat this with anti-sickness tablets and antibiotics, though telling him off for failing to drink enough to pass urine. His foot became a secondary concern, though both my brother and I demonstrated massive concern over the dressing on his foot, and how this was being neglected in favour of treating the other symptoms.

On Friday 17th June I got to the hospital at 11am, straight after a flight home following a four night trip to Paris, a trip my dad had paid for and insisted I still went on, to be told he was critically ill, had developed Sepsis and that the next 48hrs were critical. With the level of infection and the fact that he only had one kidney, his prognosis wasn’t good and I should prepare for the worst. What nobody could tell me was how it had gotten to this stage. My dad had missed out on seeing his national team at the Euro’s, and I was so excited to see him and tell him all about it, my bubble popped and I was heartbroken.

He was on oxygen to breathe and having regular blood transfusions to pump clean blood through his system and hopefully flush the infection out. On the Sunday, his infection levels were lower but he was still critical, and his move to Morriston Hospital for treatment to his foot were off the cards for the time being. Less than 12 hours later he was off all machines, was dressed and was being moved. He was finally having his leg looked at.

As we all know, the NHS is under massive pressure, but looking back, the signs were there. Thankfully, exactly 6 months after being admitted to hospital, he took his first steps on his prosthesis having lost 1/3 of his right leg to the infection, and is now almost fully back to himself.

But more and more awareness needs to be raised so that incidents like my dads become a rarity. Already this year I know of 2 Sepsis related deaths, and when I wrote this it was March 1st. Things need to change, and the only way to change things and raise awareness is by supporting those doing the work to make those changes.

Like I said, I am not a natural runner, but I am doing this challenge because I know not everyone’s story has a happy ending, and I really do know how lucky I am to be able to say that my dad is a survivor. 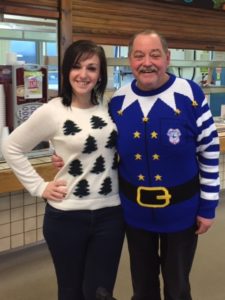 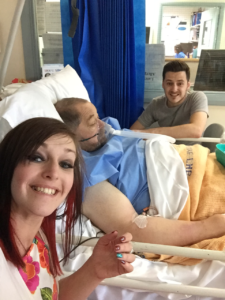 Back at Cardiff City Stadium – Wheelchair Bound, but made it back for the 1st game! 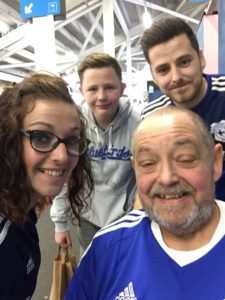 I run for Sepsis, and for awareness 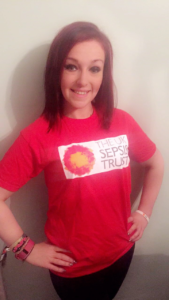