What lessons can we learn from the recently settled medical malpractice lawsuit against the clinic where Joan Rivers died days after undergoing a routine endoscopy?

The 81-year-old comedienne was admitted to Yorkville Endoscopy on August 28, 2014 after complaining of a hoarse voice and sore throat to undergo a laryngoscopy and endoscopy. Both are routine examination procedures, the latter of which is performed under sedation.

The suit alleged that doctors at Yorkville Endoscopy performed unauthorized procedures, snapped a cell phone selfie as she lay sedated, and failed to act as her vital signs deteriorated. Ms. Rivers’ ultimately stopped breathing and died from cardiac arrest.

The tragedy has prompted the Rivers family to focus on preventing similar incidents from happening again. In a statement, Ms. Rivers’s daughter, Melissa Rivers, said that she “will work towards ensuring higher safety standards in outpatient surgical clinics.”

Ms. Rivers’ story was one of the key topics discussed during a recent meeting of the American Society for Healthcare Risk Management (ASHRM) New Jersey chapter, including a discussion among four patient safety experts:

Here we present three highlights from their discussion.

Healthcare Facilities Need to Prioritize a Culture of Safety

A key contributing factor to Joan Rivers’ death is what Kenneth P. Rothfield, MD, MBA, CPE, CPPS (System Vice President, Chief Medical Officer, St. Vincent’s Healthcare, Ascension Health) identifies as VIP Syndrome. In the cases of celebrities like Joan Rivers who enter a clinical setting, VIPs frequently request, and receive care from, the most senior of highest-ranking physician on staff; this can be often despite the fact that in reality that person is not the most qualified to give direct treatment. The result is a non-standard and potentially subpar level of care provided, where standard policies, procedures, and routines are not followed.

What does this mean for the vast majority of patients – those who do not enjoy celebrity status?

Dr. Rothfield emphasizes the need to foster psychological safety in the clinical setting. Over half of nurses do not speak up for patient safety, even if a safety tool has warned them of a problem that the rest of the team may have missed. In the wrong environment staff can feel that it is not safe for them to speak up despite the situation not being safe for the patient, – be it for fear of reprimand, being wrong, or ridicule.

In tense moments of patient care, it can be difficult to judge – and manage or coach – potentially harmful behaviour from another team member. Dr. Rothfield highlighted the Montefiore ‘Just Culture’ tool as a key resource to effectively bridge the gap between “no blame” team environments and individual accountability. 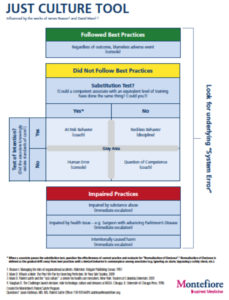 Lynn Razzano, RN, MSN, ONC-C (Clinical Nurse Consultant, Physician-Patient Alliance for Health & Safety) told the audience that the death of Joan Rivers reminds us that the medical standard of care needs to be safe both inside and out of the OR.

Ms. Razzano referenced an article she wrote for Becker’s Hospital Review about the different standards of care between ambulatory surgery centers and hospitals. AAAASF standards (the standard at the center where Joan Rivers died) state that only one of several physiological parameters need to be monitored, while the ASA demands that all of the physiological parameters must be monitored.

Most importantly, measuring ventilation metrics using capnography is an explicit ASA standard, but not in AAAASF standards. According the the coroner’s report on Ms. Rivers’ death, the comedienne suffered brain damage as a result of hypoxic arrest. Had capnography monitoring been used, an earlier indication of respiratory distress may have been detected and hypoxia could have potentially been prevented.

Dr. Gross stressed that, whenever there’s an opioid or sedative given, special precautions need to be taken. One possible solution is to have an anaesthesiologist, or other subject matter expert such as a respiratory therapist, present along with the doctor giving the procedure.

The Cost of Malpractice is High

While the Rivers family has declined to disclose the value of the settlement, it is likely that reparations paid by Yorkville were steep. Michael Wong, JD (Executive Director, Physician-Patient Alliance for Health & Safety) discussed the high costs of malpractice.

According to a study published by the American Society of Anesthesiologists (ASA), the median payment per opioid-related malpractice claim outside of the OR was $330K – as opposed to $210K within the OR. It’s a reminder that even ‘minor’ procedures can have major risks and hidden harm.

Prioritizing a culture of safety and implementing effective standards of care can reduce the costs of litigation while ensuring patient safety in the process. Mr. Wong cites the success at St. Joseph’s/Candler (SJ/C) hospital as a cornerstone case study, where the effective implementation of capnography monitoring resulted in the eversion of an estimated $4 million in potential expenses. Similarly, implementing capnography monitoring standards at the White Memorial Medical Center reduced rapid response calls by more than half.

While the focus is, first and foremost, always about keeping patients safe, building the business case for a new quality improvement initiative can improve adoption of patient safety initiatives. For SJ/C, it was calculated that the 5-year return on investment of implementing capnography monitoring for their patients was $2.5 million – a potentially persuasive sum for an administration resistant to safety improvement efforts because of budget constraints

Joan Rivers’ death was a tragedy, with a range of contributing complications. How might the use of differing monitoring standards have affected the outcome in the procedure Joan Rivers underwent? Could Yorkville Endoscopy have prevented her death by fostering a more positive culture of safety? What safety initiatives could have been proactively implemented for the cost of the undisclosed settlement? In this particular case, we’re left to only speculate.

2 thoughts on “Highlights From Joan Rivers’ Death and Lawsuit”