The recent case of five-year old Amber Athwal is a reminder yet again of the dangers of dental sedation without the availability of adequate personnel and patient monitoring. Unfortunately, what happened to Amber is not an isolated event, as other pediatric deaths have recently occurred, tragically with 6 year-old Caleb Sears, as well as 9-year old Solomon Womack, 17-Year Old Mariah Edwards, and 17-year-old girl, Sydney Gallegher. 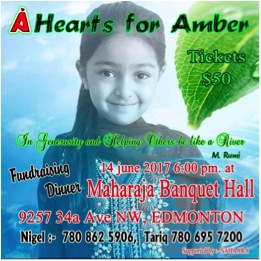 Please go to Hearts for Amber to donate support – http://bit.ly/2ymagZX

Under general anesthesia, Amber underwent dental surgery to extract some of her teeth. A lawsuit claims that Amber suffered “profound neurological injuries” after being deprived of oxygen, while recovering from the procedure.

The lawsuit sets forth the chronology of events as follows:

Following the dental work, according to a letter from by Dr Mather, Amber was monitored for blood pressure, heart rate, heart rhythm and oxygen.

Because of what happened to Amber under Dr. Mather’s care, the Alberta Dental Association and College (ADA&C) permanently suspended single operator sedation – which is “simultaneously provide deep sedation or general anesthesia and dental treatment” – and requires the adoption of the American Society of Anesthesiologists (ASA) Continuum of Depth of Sedation in defining various levels of sedation.

During all anesthetics, the patient’s oxygenation, ventilation, circulation and temperature shall be continually evaluated.

While Amber’s oxygenation was monitored, according to a letter by Dr. Mather, her ventilation was not. ASA’s standards for basic anesthetic monitoring provide:

Every patient receiving general anesthesia shall have the adequacy of ventilation continually evaluated.

Adequacy of ventilation is measured by capnography, which was not used to monitor Amber during her recovery.

As provided for in our position paper, “Patients Receiving Opioids Must Be Monitored With Continuous Electronic Monitoring:”

PPAHS advocates for the inclusion of capnography monitors alongside other methodologies. Studies have shown that monitoring of end-tidal CO2 (ETcO2) provides an earlier indication of respiratory distress than intermittent checks or pulse oximetry. In one study, 72% of events of prolonged hypoxia were preceded by a drop in ETcO2, at an average of 3.7 minutes before a subsequent decrease noted by pulse oximetry.

Monitoring with capnography has been endorsed by the Association of periOperative Nurses (AORN):

It is also supported by the Association for Radiologic & Imaging Nursing (ARIN):

“ARIN endorses the routine use of capnography for all patients who receive moderate sedation/analgesia during procedures in the imaging environment. This position is based on an extensive literature review demonstrating technical superiority and cost advantages with capnography use.”

Given these monitoring standards, there is no reason why clinicians may not know of their patients’ declining respiratory function. Amber may not have suffered brain damage had she been monitored with capnography for adequacy of ventilation, which might have alerted her attending clinicians to her deteriorating condition.