An article by The Globe and Mail highlights a World Health Organization (WHO) report showing that the United States is falling behind Canada when it comes to maternal mortality. 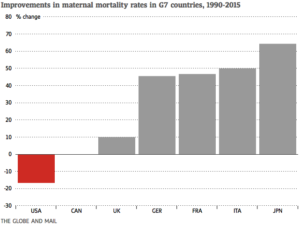 According to the report, maternal mortality fell worldwide by 43 percent during the 25-year period. The decrease can be attributed to better access to improved health services during and after pregnancy and childbirth, as well as better sexual and reproductive health services and family planning.

The US joins North Korea, South Africa, Venezuela, the Bahamas, Georgia, Serbia, Guyana, Jamaica, Saint Lucia, Suriname, Tonga, and Zimbabwe as the world’s only countries where maternal mortality has worsened between 1990 and 2015.

This trend is particularly alarming when one considers that the US spends more money per capita for maternity care than any other country. 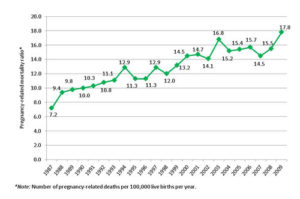 Drivers of Maternal Mortality in the United States

According to Peter Cherouny, MD, Emeritus Professor, Obstetrics, Gynecology, and Reproductive Sciences, University of Vermont, Chair and Lead Faculty of the Institute for Healthcare Improvement (IHI) Perinatal Improvement Community, there has been an eight-fold increase in the maternal age group 35 and older in the last thirty to forty years. The operative delivery rate has increased over 50 percent in the past ten years and about 60-65 percent in the last 15 to 18 years, and surgical intervention increases the relative risk of VTE for obstetric patients, who, due to pregnancy, are already at a four- to five-fold increased relative risk of VTE.

These factors heighten the risk of serious adverse events including death among maternal patients.

“From a gynecologic standpoint, when we look at surgery alone, we know that about literally—this always surprises me when I look at it—in non-prophylactic patients undergoing significant gynecologic surgery, 15 to 40 percent of them develop a DVT [deep vein thrombosis]. So it’s not surprising that the risk factors are there and can be translated to the obstetric community with the increased cesarean surgical rate that we’ve seen.

“Overall the data pool showed a non-significant difference between route of delivery and maternal death when you excluded pulmonary embolism.

“In other words, if we were perfect in our prevention for venous thromboembolism and pulmonary embolism, we may see a dramatically different overall risk association, particularly with our operative deliveries.”

Given Dr. Cherouny’s statement that if we perfect our prevention for VTE then risk association could be significantly different, could a focus on OB VTE reverse the troubling trend in maternal mortality?

PPAHS, in collaboration with the IHI and the National Perinatal Association made available OB VTE Safety Recommendations.

Canada and the United States are similar in many respects from a socioeconomic standpoint. Why do you think Canada has outperformed the USA in the area of maternal mortality? Leave a comment below.